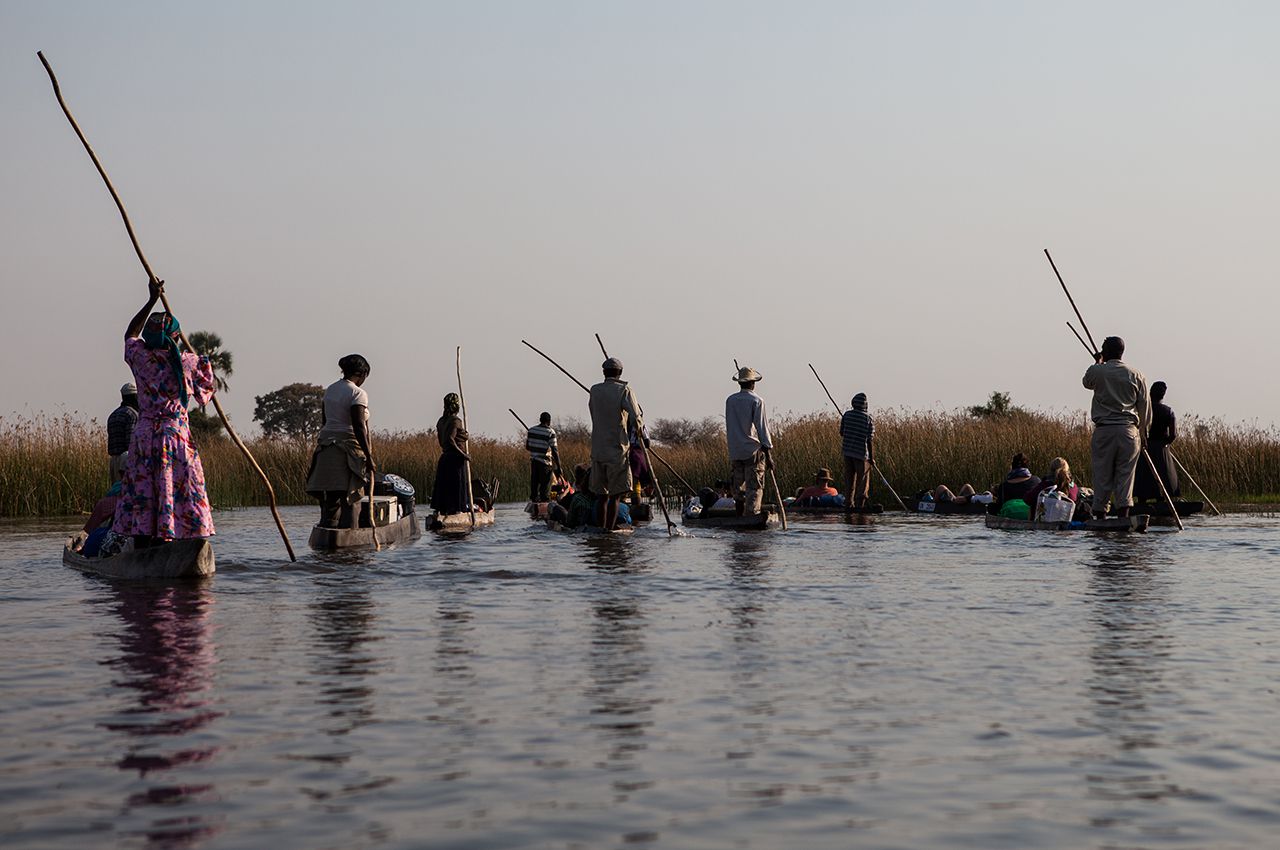 For many intrepid travelers, the ultimate destination is Africa. With its combination of stunning wildlife, ancient culture, and breathtaking landscapes, there is truly nowhere else on Earth quite like it.

However, many people falter at where to start their African journey. The continent itself can be daunting, with a vast physical area, budgetary constraints, and often dangerous or at the very least annoying obstacles that must be dealt with. For those adventurers looking to saunter a bit off the beaten track, while ultimately getting the best bang for your buck, I would recommend visiting Botswana.

As a landlocked nation, Botswana can be entered from a number of ways. There are border crossings from Namibia, Zimbabwe, South Africa, and Zambia, or you can fly directly to the capital of Gaborone. We chose to enter from beautiful Victoria Falls in Zimbabwe and traverse our way east to west, thus seeing all that the country has to offer.

Within close proximity to the eastern border lies Chobe National Park. Despite lacking the reputation of East African parks such as the Masai Mara or Serengeti, Chobe is nevertheless a stunning park, offering spectacular vistas that combine arid, desolate desert with the rich and fertile landscape of the Chobe River. With more than 50,000 Kalahari elephants, Chobe also boasts the greatest concentration of elephants on the planet. The safari itself allowed us to observe a diverse array of remarkable animals including lions, leopards, (many) elephants, crocodiles, hippopotamus, giraffe, zebra, and more. Chobe also offers the opportunity to witness one of the most spectacular African sunsets anywhere on the continent. Furthermore, it is one of the few parks in Africa where the opportunity to camp within the boundary of the park is available, your night spent serenaded by the calls of the wild animals that surround you.

Further west from Chobe lays the fabled Okavango Delta, an area that has enchanted travelers and writers such as Laurens van der Post for many years. The Okavango Delta is comprised of waters that drain from the Okavango River and the Angolan highlands, traveling up to 1,200 km along the way. This massive amount of water causes a variance in size from 15,000 square km in the dry season to a staggering 22,000 square km during the wetter months.

The only way to travel through the Delta is via a guided mokoro, a small dugout canoe that has been used by the local bushmen for generations. Traveling through the winding labyrinth that constitutes the Delta is an exceptional experience. However, when we began spotting hippos, notoriously regarded as zealously territorial and the greatest threat to humans, my eagerness to escape the water became more pronounced, and I was grateful when we arrived at the campsite where we would be staying amongst the local tribes for three days.

Camping in the Okavango Delta offers a unique opportunity to interact with local tribesmen in a setting that lacks the gimmicky or tourist trap nature of many more popular locations in Africa. Game walks offer the rare opportunity to view wildlife on the ground level, and we were able to witness the outcome of hunts in the form of fragmented remains, as well as learn of medicinal and practical uses garnered from many of the plants and animals in the area.

At sunset, we even witnessed a territorial hippo battle between two alpha males, the result of one trespassing into claimed waters. The chase lasted for hours, but when one of the hippos finally took refuge only a few yards from our camp, it made heading out to the bathroom that evening somewhat of a daunting experience. At night the locals provided us a further glimpse into their culture with local cuisine prepared from regional ingredients, as well as their passion for music. It was truly an experience I shall never forget.

Botswana offers a myriad of wonderfully unique travel opportunities, including many more than could be touched on in this short article. The country is truly an adventurers’ paradise, and for those travelers who wants a true and insightful view into what makes African incredible, I cannot recommend it enough. I am often asked how I can afford the opportunity to travel so often. It’s simple: start saving, buy a plane ticket, and take off. Afterwards, the hardest part is already complete, and true adventure awaits you at every turn.

Travis Allen is a freelance author and photographer. Originally hailing from Ontario, he has spent the past five years living and traveling overseas, documenting his travels in an attempt to inspire others to break free of the bubble and see the planet in all of its glory.

In the Adventure Seekers Road…

It’s been a long summer…