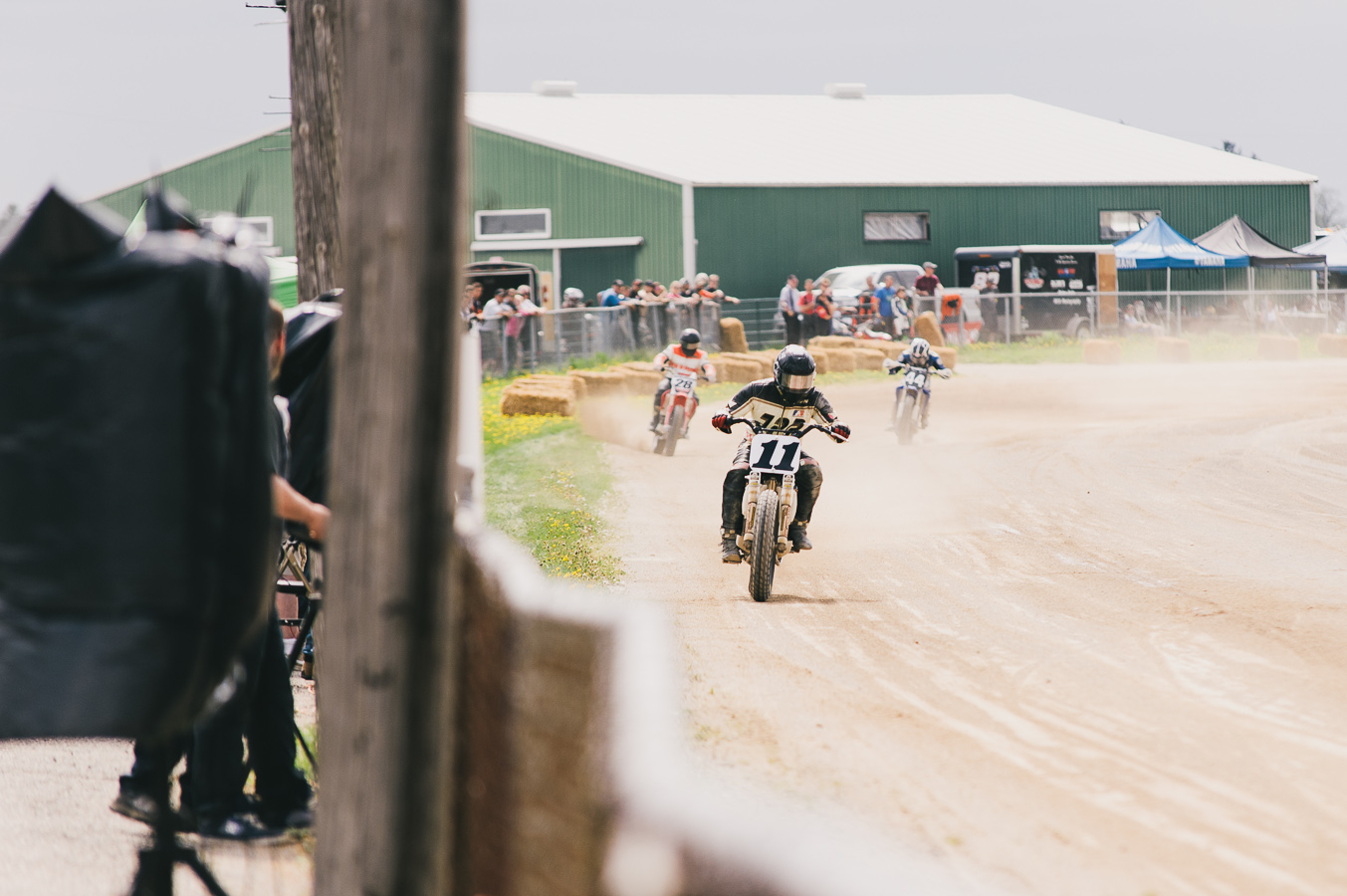 Having grown up in a small town with its own 1/8th-mile racetrack, visiting the first stop of the Flat Track Canada race series in Paris, Ontario brought back flashes of my childhood; seeing the machines whip around the course at full throttle, exhaust fumes hanging in the air under the spring sun, sound echoing violently. Local race tracks are home to many hobbyists and few professionals, broken parts and broken hearts…this is racing, baby.

Flat Track is a category within motorcycle racing that is simply summed up as a hybrid between road racing and motocross. No jumps, dirt tracks, a few turns and as flat out as possible. The bikes are either modified dirtbikes or purpose-built that see a lower, stiffer suspension, no front brake, not-so-knobby tires and a whole lotta throttle available. Riders “drift” their bike around the corners, maintaining as much speed as possible through the turn and apply power down the straights reaching speeds upwards of 160 km/h while battling for position.

Riders race in heats, the winners of each ending up in the final to battle for the bragging rights and small cash purse available (in this case, almost $5,000 was spread between the field). There are classes ranging from youth to intermediate, expert and even the master class, which, believe it or not, has guys older than your dad out there sliding around. There’s also a classic ride category and even a four-wheeled class.

The riders vary from tykes to high-school kids, wannabe racers to actual, real professional motorcycle racers. One even admitted he was up to get some laps in before another race. Some just need seat time to test their machine for the upcoming season, but most are guys like your neighbour, working class hobbyists. In it for the strong community and knowledge sharing to the immeasurable level of enjoyment one gets from truly working for the weekend—these guys are just as serious on the track as any professional.

There is something unique about the way the racers navigate the track, you’ll notice their inside leg is usually off the bike, sliding on the ground. When off the bike and walking around the pits, racers give off an audible clunk as if they were some type of pure bred racing cyborg. The inside leg acts as an outrigger to support the rider in the turn and help keep the bike stable and the boot is outfitted with a steel plate to help protect it.

A quick jaunt down the QEW and then 403, past Hamilton and then Ancaster, you’ll find yourself in Paris, a small town nestled on the Grand River. It is known for its cobblestone architecture and healthy deposits of gypsum. A sleepy bedroom community 90 minutes from downtown Toronto, Paris is one of the many smaller towns in Ontario seeing an influx of young professionals flocking to the sole main street. Little do the potential residents know, it’s one of the few places in the province this type of racing can exist due to having available grounds and tracks to accommodate it. Many have paved small circuits, but very few are for dirt racing.

The main event is held for the end of the day. This is where the privateers, local heroes and visiting pros duke it out in a 15 lap battle royale where nothing is left on the track. The riders walk out alongside their bikes to greet the crowd and get introductions from the MC; “Here’s so-and-so from the U.S.A”, “Rider X is the oldest of the pack”, “Hometown Hero looking to take the win” – you get the idea.

The bikes rumble to life, big displacement four-strokes thundering off the surrounding buildings; put them together and it sounds like wailing banshees being stung by thousands of killer bees. It’s on.

Expect to be at the venue for 4 to 5 hours. Expect to pick your favourite rider without ever knowing of them beforehand. Expect to balance a box of french fries on your knee while getting peppered with track debris as the bikes race by. Expect a group of friendly people who are there for the same reason, to have a good time. Expect the bikes to hit speeds you never thought possible. Expect to find out what burnt race fuel smells like.

Above all else, expect to become a fan.

I have always been drawn…

As a self-diagnosed travel addict,…