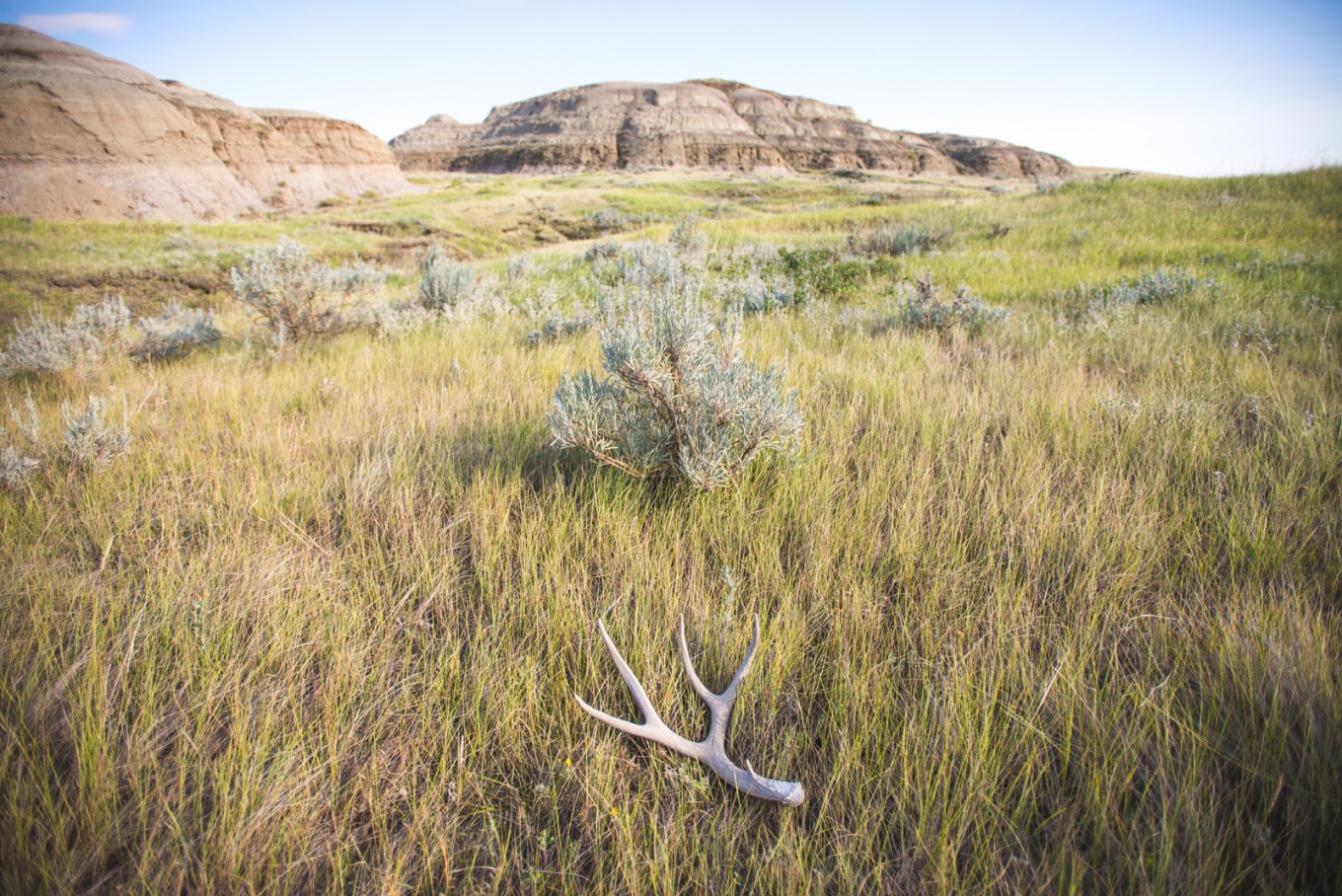 This past weekend I traveled south in Saskatchewan to Grasslands National Park with three Saskatchewan locals. When you think of the Saskatchewan landscape you probably don’t think of a dynamic environment, however, I’m learning that the landscape is very different when exploring the prairie province.

We arrived quite late Friday night due to some misguided Apple Map searches and set up the tents under the full blue moon. The next morning we awoke to some pretty vast and beautiful scenery. Two tipis were constructed just on the other side of a shallow creek that flowed through the camp ground, and a lovely little visitor’s centre sat next to it. We checked in with extremely friendly park staff and explained that we were looking to do some backpacking and back-country camping and would be returning Monday afternoon. The cheery parks lady was thrilled and said “oh, you’ll be going out to the Valley of a Thousand Devils?” What a great name for a camping area. She offered up a Garmin handheld GPS and said we would need it to find the water cache. She also mentioned the temperature climbs about 10c higher out in the valley than it does at the visitors centre. With this new information we packed up as much water as we could carry and began the trek out into the valley, heading straight for the water cache.

After two hours of hiking we were surrounded by the badlands and colourful hills. The area is called the Killdeer Badlands and have remained untouched by glaciation. The exposed hills reveal 60 million years of geological history and according to our information booklet were the site of the first dinosaur discovery in Western Canada back in 1874. The parks staff also informed us a large dinosaur tail had recently been discovered in the area and excavation was to begin next week.

Temperatures really did start to spike around noon just as we arrived at the GPS point for the water. As we hiked up we noticed a tent pitched on top of the location. Three other hikers popped out and asked if we were looking for the water. They all looked super hot and tired and had literally propped up their tent on top of the water cache which consisted of a wooden crate with 2 18L water jugs in it. We filled our bottles and chatted briefly with the other campers who were the only people we had seen all morning out there. We hiked over about 300m and decided we would try to ride out the 40 degree heat under our tent flies like the other sad hikers. We set up the poles and flies from our group’s two tents and attempted to join them together for a big shelter area.

At this point we were all dripping sweat and were eating snacks and drinking as much water as we could. The hot strong winds gusting and blowing sand in our faces made it even more fun while it continued for another 3-4 hours. It was probably one of the most miserable I have been on a camping trip. My quick dry clothing was salt stained from the sweat and my legs were dripping sweat while I laid there in the shade trying not to move. Finally around 4:30pm a bit of relief came and we moved down into the valley slightly beside a large butte, which eventually would provide us with some shade.

The evening was absolutely gorgeous in the badlands and we all agreed we should hike up on top of one of these hills for sunset and some Fireball (a fitting drink choice having just spent the day roasting under the big ball of fire). The badlands opened up to a vast landscape of grasslands and a great sunset.

The area was just so dry that an extreme fire ban was on and no fires were allowed. We spent the evening’s playing cards and shooting long exposures of the stars. The temperatures dropped to the teens and the landscape seemed to come alive with insects, birds, bats, and deer that all seemed to have climbed out of their hiding places from the sun.

That next morning we all agreed there was no way we were roasting in this Mad Max desert and planned to hike to a creek roughly 3km away. We packed lunch and a few liters of water each and made the hike down into the valley. What we discovered was a brown creek about 5 feet at it’s deepest with clay banks, but boy was it refreshing. We acted like 12 year-olds for a few hours in the cool water and enjoyed the hell out of it. We stumbled upon 5 deer sheds in total and saw probably a dozen deer take off from their muddy creek hiding places.

This lower area was full of life, where as the badlands area seemed to be where things went to die. It was another completely different environment within the park.

The parks guidebook colourfully described the “emotional vastness of the grasslands” quite well in my opinion. The harsh environments mixed with some truly beautiful scenery make for a pretty wild experience. We saw 2 other groups camping in the back-country on August long weekend and you could literally see for miles and miles at all times. The area is just so remote that the park does not get much traffic, and the parks staff is thrilled to see visitors. I highly recommend to anyone looking for a unique camping experience to check out the park.

Alija Bos is an Adventure Photographer/Hydrologist. Alija grew up in Muskoka, Ontario and has worked in 5 provinces/territories in the past year and a half while traveling the back roads of Canada. Alija's passion for the outdoors has led him to pursue career paths that allow him to spend a good percentage of his year on or around the water.

The Cannondale Trigger series is…