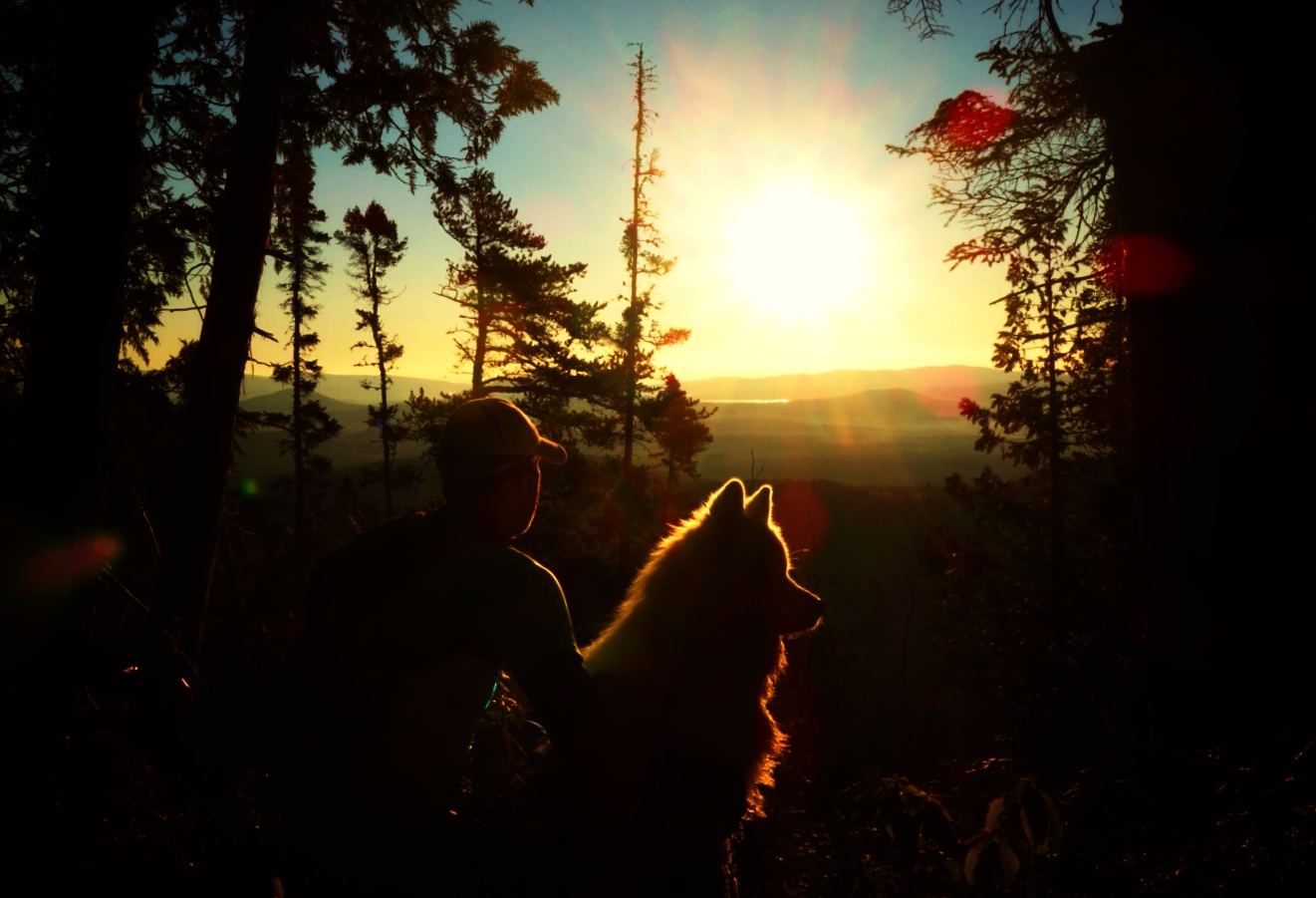 Into the Wild-105km Solo Run

This is a first person account of what it is like to complete a solo adventure, a 105km loop in the Quebec wilderness. Armed with a radio, his dog Sputnik and an insatiable thirst for adventure, Pierre-Etienne re-lives his experience for Adventure Seekers.

The idea: This trail is a very well known hiking trail in Quebec and the end is located about 15 mins away from the family cottage. I’ve been hearing all about it (how hard technical and unpredictable it is) my entire life and is usually hiked in 7 days. So when I started running it rapidly became an objective to run it in one single push. I also thought it would be a great way to raise money for the Suicide Prevention Center which is a cause close to me.

The Prep: Aside from running 100km-135km to train, the team and I started planning and preparing this adventure at the end of June. Just to find the access roads to reach to potential aid stations took days upon days of scouting. I also did all the sections of the 105km in advance before linking them all together last week. A lot of communications, equipment, team coordination strategy and risk management planning went into this project. One of the most interesting element of a large scale solo project to me is that it is actually a team effort. All the components and team members must work like clockwork in order to achieve the goal and unsure as safe of a passage as possible.

Start to Marmotte via Mount Morios (this follows the map at the bottom of this page: http://6xsix.com/trails-20km/traversee-de-charlevoix/): Started at 6am when still dark and stars shining.

About minus 10 degrees out so cold but nice for Sputnik. I quickly realized that the rain from the previous week had gorged the trail with water and that it would be a hard one. Later I counted all the small creek and water crossings on the whole trail and there was 153 of them where I had to stop and try to find a way across over frozen logs. Further in the woods one of the old bridges Sputnik went through a board and I had just enough time to catch him from a nasty fall in a creek 10 feet below.

On that stretch I saw two Moose and two Bears. One of the bears was right in the trail about 15 feet away after a bend. Wondered if this would jeopardize my project but had literally a calm, long (felt like forever) chat with him and he finally headed back in the woods so we could go pass by with my heart throbbing.

We made good progress and climbed the Morios just in time for sun rise over the valley. Sputnik’s hind legs slip into a crack between 2 rocks while running yanking his hips pretty badly. I take his legs out and realize he can’t walk and falls to the ground immediately. Thinking it might pass I take him on my shoulders (kind of like a shepherd with a lamb) and walk for about a km and put him back down to see if he would walk… and it is a definite ‘no’I therefore send a distress message from my SPOT which says I am ok but will be considerably late. I take the 55 pound fluffy beast on my shoulders and had no choice to carry him out.

I carried him on my shoulders for 12km up 450m and down 750m to the valley floor to the next aid station. This whole section is made of huge rocks piled up on top of each other covered in snow and ice just to make sure I get the full experience. The rocks are high and every step is like a squat. (FYI:The Harricana race had decided earlier not to do this section as it was too technical) I still managed to average 10:05min/km with my fastest km at 6:43min/km pseudo running with sputnik on my back.

On one of the steps going up I tore something where my right quad attaches to my hip and knew this whole mishap could frankly put and end to my adventure. Did I mortgage my legs to much on this section, would I make it all the way to the end? No matter what, this was the level of commitment I had prepared for and it is totally in line with such solo projects.

At the aid station I had a long talk with my Dad who was such help at setting up all aid stations and was questioning the nature of this project. As this was a project with Sputnik and he had fallen in combat did that mean it had to end. I decided to take a mountaineering position and said to myself I carried the injured to safety now I have to do the last push alone in the name of everybody behind me and for myself.

I’m lighter but I feel the damage in the legs. About half way there and my hip is hurting and worried about Sputnik a lot. I decide to embrace the pain and just accept it as part of the journey. The first part is beautiful beneath 500-600m granite cliffs and in non technical terrain. I had to make up for lost ground as I wanted to run the ‘Coulée Chouinard’ in daylight. It is a very watery technical section where it is pretty easy to get lost. (see picture of summit). I managed just in time to do it before night fall. Morale was still pretty high even though the water crossings were a definite pace breaker. Crossing over ice covered logs with about 70km in the legs is not the most joyful experience. I got the the next aid station and dad was once again there with all I needed. We had problems with the sat phone so I could not call my girlfriend to give everybody an update and get a bit of a moral boost from talking to her.

Another section Harricana decided to go around as there are some very technical sections. Legs but mostly the tear in my hip is making any sort of steep descent or technical move difficult. It is however starting to look like I am going to make it so I once again choose to embrace the pain and push through. You can hear moses very clearly and as if I needed to wake up a little I came across a third bear who poked his head in my beam of light. Getting closer to the next aid station I started to smell smoke. My dad had brought some firewood and had made a big camp fire for me to warm up. I have never like the smell of a fire this much. Dad also managed to get comms back up and I get a chance to call home. The moral is still really good and with that last boost I am ready to make the final push.

Even if I spent way too long at the aid station and my legs have a significant lactic acid build up, I only have 10.5km left with a small 3km ascent after descending to the finish line. Less than the home trail behind my house I tell myself. Surprisingly I am still running uphill aside from the steep sections as well as going down. Because of the legs and hip at that point I have to slowly walk down the steep downhill section.I finally reach the dirt road and carry on running on it for the last 2km. I get to the finish line and the crowd is roaring… well dad clapping and whistling which is just the same to me. 21hrs total time and 14:40:00 of running accounting for Sputnik on my shoulders.

After a couple of years of ignoring adventure’s call, it became imperative to reconnect with it or lose oneself. Pierre-Étienne, now accompanied by his faithful sidekick Sputnik as well as his ever present desire to push back boundaries, decided to take on running whilst incorporating his knowledge and thirst for the outdoors and expertise in multimedia. The result: solo ultra-trail running projects, in remote areas, requiring high levels of commitment.

Fall In Muskoka: the next…

With winter on the way…