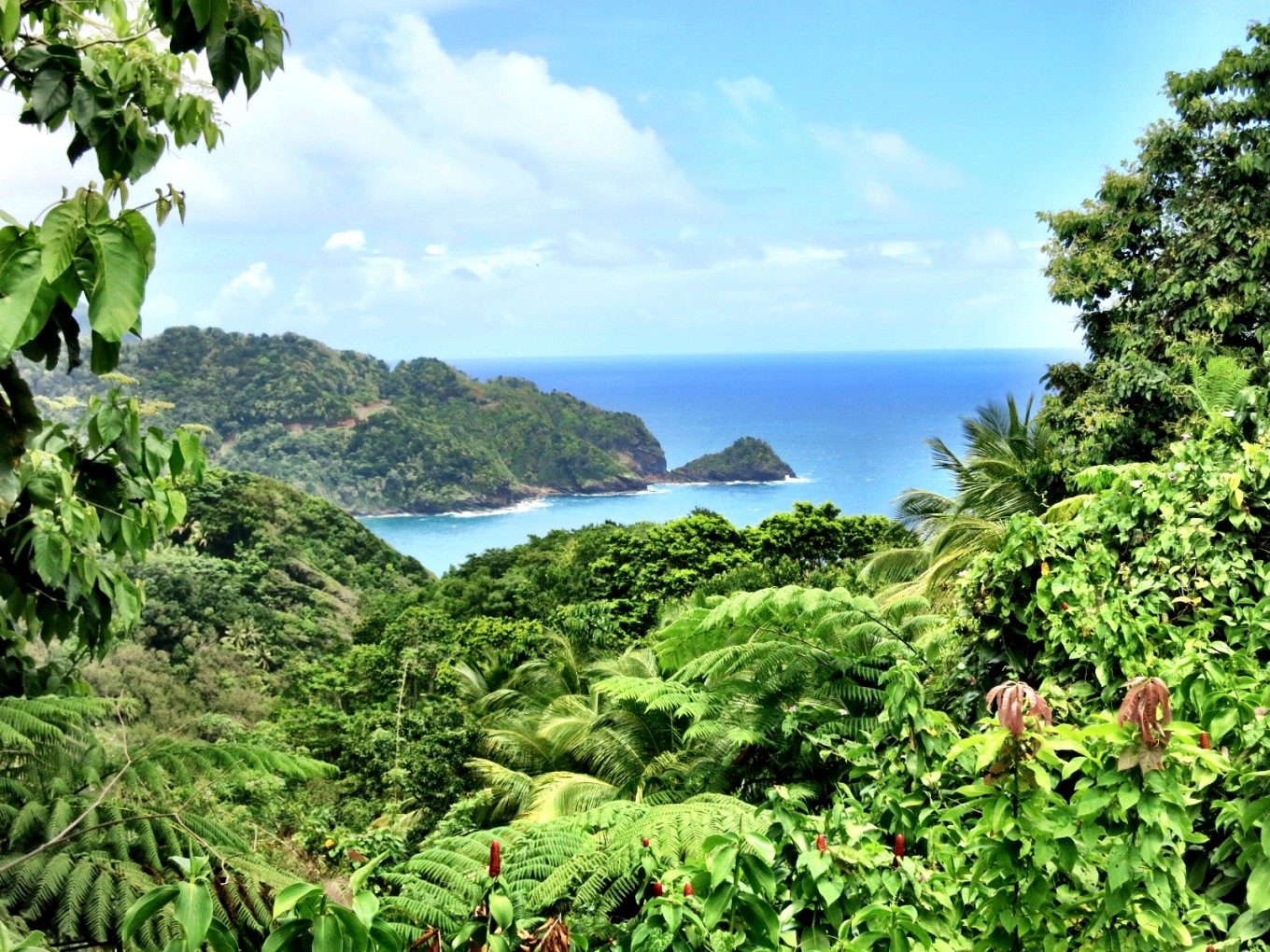 Iphone in Muskoka: Deep in Dominica

The roads of Dominica are not for the faint of heart, and definitely not for those with a hangover. The guidebook says as much, but there we were anyways.

It was the morning of our 3rd day on Dominica, and as the 4wd Toyota mini van our guide was driving somehow lurched and screeched its way up the switchbacks up into the rainforest, I seriously wondered if maybe this should have been one of those “beach days” instead of a hung right over, full-out “adventure day.” But it was too late now, and we were minutes away from one of the most gruelling and/or beautiful hikes in the Caribbean, depending on which Trip Advisor review you believe.

“So…..” began our guide Justin, rather ominously turning the Rihanna down.

We had met Justin a couple days prior in the capitol. He was a cab driver among many others, waiting for fares/suckers at the cruise ship port in Roseau, and I singled him out simply because he was wearing Vans and a Hurley t-shirt. I told him we needed a cab back to our resort because we had taken a bus into town that morning, and wished to avoid using the same method to get back. Like all others on the island, the “bus” is really just a long mini van that you catch by sticking your thumb out, in which there are stuffed as many souls as humanly possible without the van popping like a bubble. This may not seem like a dreadful description when compared to some mornings on the TTC, but when you factor in the Caribbean climate plus the humid x, the discomfort level for us Canadians multiplied exponentially, and quickly.

“So….” Justin said again, more forcefully. We tore our eyes away from the stunning island vista we were passing and met his eyes in the mirror. Like many other cab drivers, he was also a guide, which is how we came to be clunking around in his van on our way up to the drop off point for Boiling Lake.

“Yes?” I asked, already feeling the heft a wrench about to be thrown into the works of our hangover.

“So, my friend, the guide to go with you to Boiling Lake, he’s sick.” Justin said.

“No” was his answer, “But we’ll find another guide before we get there, don’t worry!” And with that he darted his eyes back to the road. And that’s how we found Stanley.
Stanley was waiting on the side of the road in the drizzle about a kilometre away from the trailhead and after a rapid fire round of haggling, joined our happy hangover hangout and hopped in the van.

Stanley, as it turned out, was what you would call a character. Dominica, thankfully, is full of them.

“So, when should I pick you guys up?” Justin asked as we stumbled out of the van. “Ummm…well what’s normal?”

“Well, are you good hikers?”

I thought back to a winter of snowshoeing, factored in the 8 hour allotment the guidebook recommended, and then subtracted lollygagging factor.

“You sure?” he asked, eyebrows lifting. Stanley also raised an eyebrow.

“Yeah, that should be good.” I said, trying to sound confident.

Justin had a quick conversation with Stanley in rapid fire slang, indicating that we had already consumed a couple barley pops on our way up, and only had more in my backpack. Stanley grinned, dismissing Justin with a wave of his hand, and we were on our way.

Stanley quickly filled us in on the history of the trail while we walked, and included a personalized portion of his tour by letting us know that he had fallen into the Boiling Lake as a younger man. Although possibly while intoxicated, it lead to an airlift to nearby Martinique and resulted in some lifesaving but nasty skin grafts to most of his legs. Perhaps mistaking our silence for disbelief while trying to keep up to him, he stopped mid trail.

“I normally don’t do this,” he stated, and began unbuckling his pants.

And sure enough, to mixed emotions on our part, he had certainly had skin grafts all over most of his legs. It was a sobering moment.

We nodded in agreement, and fell into step. It wasn’t long after that Stanley let us know he hadn’t worked in two weeks.

“And why is that Stanley?” I asked, knowing it wouldn’t have mattered if I had asked anyways.

“Oh.” We both said. Stanley then proceeded to regale us with a tale of woe that involved small town politics, stolen corrugated steel roofing, grapefruits, and dry biscuits.

By the end of Stanley’s story, we were grinning, enthralled, sweating and almost forgetting the incline sloping upwards under our feet. Stanley, as it turned out, had also helped make parts of the trail, hacking down the ubiquitous red fern trees that made up the many thousands of steps that wind up and down the slopes. He also kept a frightening pace, and although dressed in a poncho with knee high rubber boots, never broke a sweat that I was able to see. Gently sloping red fern steps and lush rainforest turned to steep scrambles with glimpses of steep drop offs to either side.

When the forest cleared and we broke the tree line, the vistas were stunning, like nothing I had ever seen before. Verdant green and mountainous, with ocean on all sides. The trail turned from easy, with a guide seeming like an unnecessary luxury, to sketchy in mere minutes, and we were happy to have Stanley pointing the way. Stanley also had a habit of greeting all Asian hikers we came across on the trail, whom either seemed as though they had given up or were taking an extended break as “Chang” or “Chang Chang”. To be honest, at first I thought he knew a couple of them as regulars until he wanted to practice his Kung Fu with a gentleman who seemed a little confused and reluctant. After (finally) reaching the Boiling Lake, Stanley sufficed by practicing his kung fu alone on a rock a little ways from us while we lunched on beer and smushed sandwiches. The Boiling Lake is a surreal body of water that you definitely do not want to get too close to, brought to a roiling boil by a magma chamber just below the surface of the lake. In essence, it’s a lake on the top of a volcano, only the second of its kind in the world of that size. It smells like rotten eggs and is a mecca for hikers in search of strange and unique destinations.

The hike back was exhausting, (likely due to running out of beer), but rewarding as we stopped for more photo ops and a dip in sulphuric hot spring pools that were like natural ingredient hot tubs that you might just never want to get out of…

We finished off the hike with Stanley taking a crunch in the bush while we swam in Titou Gorge, a freshwater runoff cavern that was used in Pirates Of The Caribbean II – refreshingly perfect and fitting.

We spent 2 weeks on Dominica, and it seemed like every day unfolded like our Boiling Lake adventure. Dominica lives up to it’s name as the Nature Island, and we explored deserted beaches, amazing snorkelling spots, incredible hiking trails, went whale watching, soaked in hot springs and more, all with almost no other humans in sight. I have a story and adventure for every day we spent here, and to all the ex pats who live there now, I have only respect mingled with jealousy. Dominica is truly the last of its kind in the Caribbean, a pain in the ass to get to, but largely unspoiled by western franchises and chain resorts.

Dominica is truly a Make-Your-Own-Adventure island for nature lovers, eco-travelers, hippies, wanderers, photographers, whale watchers, hikers, snorkelers, divers, beach lovers, backpackers, sailors, turtle saviours, rastas, and those who can appreciate a true Caribbean culture. Respect it, love it, preserve it, cherish it. And for those looking for that looking for that Caribbean alternative, get here before an international airport opens and you have to make the same adventure as everyone else on your charter flight.

Side Bar: “Dominica, like the Dominican Republic?” was the inevitable question whenever I told someone where my girlfriend and I were headed for two weeks. To be honest, I couldn’t tell you the difference between the DR and Dominica before the internet told me otherwise either. Dominica, as it turns out, lies between Guadeloupe to the north and Martinique to the south in the Lesser Antilles chain of islands in the south eastern Caribbean. The best although not easiest way to get there for a Canadian is to find a cheap flight to Barbados and then hop a cheap(er) LIAT flight to Dominica the same day. Our Barbados layovers were awesome/tipsy.

If you could wake up…

Photography is obviously important to…