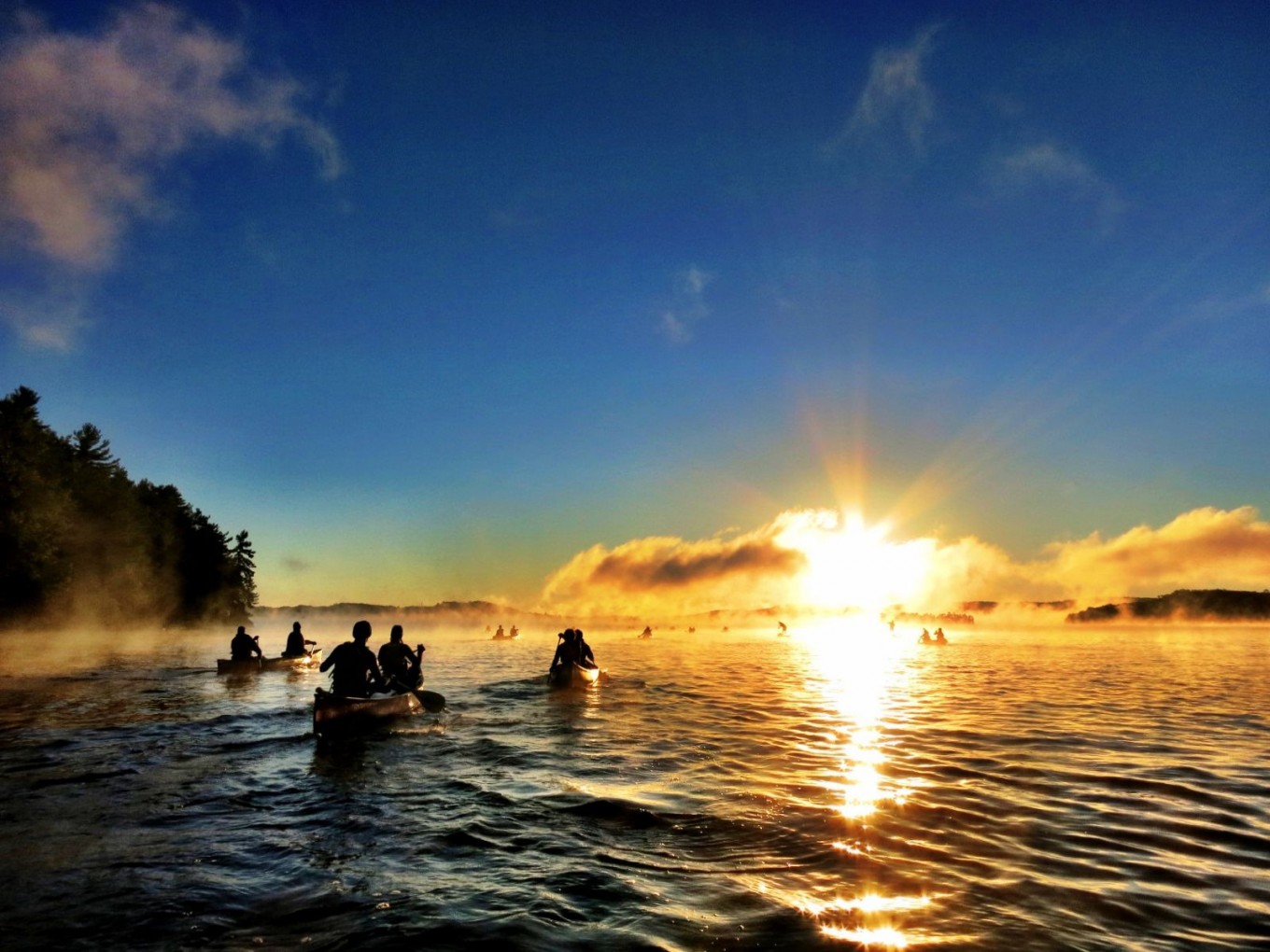 Nate Muskoka is back with another entry into his “iPhone in Muskoka” series that captures his life as an aquatic adventurer in one of the most beautiful parts of Canada, the Muskoka region using only iPhone. In this feature, Nate experiences something very few will ever in their lifetime; Paddling 130km, trekking through 19 portages, using analog maps and having absolutely no support whatsoever – in one 24 hour race. This is River X

The Muskoka River X is billed as “The Longest Single Day Expedition Paddling Race in the World,” with good reason.  The behemoth of a course covers 130 kms including 20 portages, such pleasantries as a 20km upriver section (in the dark) and more than a few rocky & unmarked portages (in the dark).  Oh, and a time objective of 24hrs or less, just to make it really interesting.  The thought of using up a weekend by paddling 130kms in 24hrs without a chance of even one beer break was frankly unappealing and I had sent the River X site link to my paddling buddy Lev in a “check this 130km craziness out” kind of way.  As it turns out he didn’t share my perspective on it and after meeting up for a few beers (ironically), his powers of persuasion had done their work and we registered our “team” online.

We promised each other we’d train all summer and paddle a section of the course every Sunday.  We’d do adventure racing type activities like eating powerbars, doing push ups, collecting Gore Tex and learning teamwork exercises.  Summer in Muskoka is full of distractions and we did none of those things.

It was suddenly race weekend and we assembled our carcasses and pile of gear at the starting area at 6am.  Each team had to comply with a stringent gear requirement list that we had hastily pieced together.  Basically, you have to lug enough gear & food to keep you alive & sheltered should emergency arise, and with good reason.  Large chunks of the course involve fast water, no direct race staff supervision, being miles away from nowhere, and just general sketchiness.  However, each team was supplied with a GPS transceiver and there were race staff in follow boats in the open water sections as well as Ski Patrollers at each checkpoint to ensure nobody was racing while dismembered or had vodka in their camelbak.

With my $10 Canadian tire paddle and our borrowed canoe (which we had never paddled in together) we stood around awkwardly at the starting line and watched with horror with our obvious naïvete and inexperience as teams wielding carbon paddles and fancy hats slid canoes worth more than my car into the water with casual confidence.

“We just won’t stop paddling”, I was repeating the only strategy and new mantra we had come up with the week before. “Right” said Lev half heartedly, looking around us as we bobbed in the pre-dawn water with everyone else.  And then we were off.  Coming out of the mouth of the river that morning into Fairy Lake with 49 other vessels as the sun rose & fog lifted off the lake is something I will never forget, and the stoke was palpable.  It felt like we practically flew across Fairy & Peninsula lakes & everyone was still in good spirits and trading jokes at the 1st portage, a 1.7km jaunt over to Lake of Bays.  My camera got some funny looks as I guess for “adventure racers” it was just added weight and time, but things got worse when Lev lit a cigarette and I turned the volume up on my Turtle Shell speaker…by the time we got to Lake of Bays we felt a little out of place.

The Lake Of Bays section spanned 20km of open water and luckily for us that morning it was sunny & pleasantly breezy on a lake that I’ve seen churn up nasty white caps in minutes.  As it turned out, the only white caps we came across were those from boaters as we paddled past million dollar cottages set in pines on the rocky shoreline – another type of authentic Muskoka landscape.  After being asked if we still knew our names at the check point at Baysville, we gave satisfactory answers, inhaled some calories, and were sent on our way into the river.

Baysville to Bracebridge was by far my favourite section – energy was still in good supply and the scenery and water were nothing short of awesome.  Quick portages along with a clear and consistent current made for a classic Muskoka afternoon on the river.   We chatted with a few other paddlers that were within distance of us – a paddleboarder from Vermont who trained on Lake Champlain and a middle aged lady in a kayak who was doing the race for about the same reason as us – to say that she had done it.  There were 3 paddleboards in the race, and while I would consider myself an avid recreational paddleboarder, I would never under any circumstances want to stand on mine for anything close to 24hrs.  Two of them even finished, but more on that later.

The sun was low as we neared Bracebridge and after a tiring portage from Muskoka Falls underneath Highway 11 to the next section of river, the scope of what still lay in front of us was setting in.  Fifty kilometres, and it would all have to be done in the dark.  At the checkpoint in Bracebridge we learned that a few racers had pulled out, and a team in front of us had gone left instead of right at a fork in the river and almost wound up in Lake Muskoka – a nice 10km detour.   We made a right and were soon portaging over and around the falls in the heart of Bracebridge, a surreal experience under bright street lights that were soon replaced by the inky darkness of the river.

Paddling from Bracebridge to Port Sydney drove us crazy. As we started upriver, fatigue and ache started slowly but surely winding their way up our spines and across our shoulders.  Our supply of energy bars that actually tasted good was depleted.  Thick fog set in, darkness fell, and conversation dropped to a minimum.  First there were the unmarked portages, usually found through sheer luck, and mostly through dense bush, during which you can decide to do one of two things – laugh and stumble on, or moan and curse while stumbling on.  We did fair amounts of both.  Navigational spotlights did nothing but bring a white wall of fog into glaring proximity, and upriver swifts meant we had to flop out of our canoe and drag it through shallows and over rocks in the blackness more times than I want to remember.

We were cold & miserable, and complained, yelling things like “Who the hell would do this?!?” not really sure if we were referring to the course planner or us.  But then there were the stars, so bright we navigated almost solely by their light, and the people along the banks, sitting around campfires with beer in their hands, cheered us on. We were too tired to be jealous, but the offers of beer and comments of “you’re almost there” somehow helped to keep our paddles in the water.

We reached Port Sydney around 2am, stiff, soaked & grumpy.  We were met by sympathetic volunteers who made sure we could still stand up and then let us huddle around a bonfire like refugees dragged out of the Atlantic.  My brain and body felt like mush and I was trying to think of excuses to stay around the fire when some friends showed up.  They had been tracking our floundering online and our stop in Port Sydney just happened to coincide with their exit of a drinking establishment.  While other racers were quietly getting massages and encouragement from family members & significant others, we were loudly filled in on the events of the night at the bar and offered beer (again).  Before things could get any more awkward, we grabbed our canoe and slogged back into the river and eventually Mary Lake.

Hallucinations can be a side effect of severe fatigue and a densely foggy Mary Lake at 3am was probably the absolute worst place for that type of nonsense to happen, and it was.

We crossed the lake using the lights of Huntsville in the distance as a guide by the simple logic of it being the place the race ended.  The funny stuff started as we searched desperately for the river entrance on a shoreline that just wouldn’t sit still.  Objects on the shore swirled and changed colour, lights on the end of docks became friendly lake creatures waving at us.  At least that’s what I saw – Lev and I were speaking to each other but not making sense, so I’m not sure what he was seeing.

Suddenly we saw some lights moving on shore that definitely weren’t hallucinatory animals – it was two of the paddleboarders.  We frantically paddled over and saw that they were putting their boards in at the mouth of the river.  We had found it.   After saying hello (I think), and not getting a reply, we eventually learned that their taciturn attitude was less due to fatigue and more due to the fact that they had already paddled almost to the end of the river only to become disoriented in the fog and paddle all the way back to Mary Lake.  I’d be pissed too, so we shut up and paddled as dawn broke above our heads and our shoulder muscles started to seize.

The seemingly endless river finally ended, and we slouched across the portage into Fairy Lake under grey morning light – home turf.  The last 5km passed like an eternity, but on Sunday morning at 7:45 we drifted across the finish line in downtown Huntsville, utterly exhausted but triumphant.  We had done it – 130km’s, 20 portages in 24hrs, 48mins.

No friends or family were waiting for us, no crowd of people clapping, but it couldn’t have mattered less.  We lay on the dock in seagull shit, grinning like idiots and chatting with the Ski Patrollers.  We found out the winning team had finished the course in a stunning 14hrs & change, and made last call at the pub (!!!!). Even knowing we had paddled with people who do this sort of thing regularly did nothing to deflate our sense of accomplishment.  Lev lit a cigarette & I chugged water.  I called my girlfriend to come and grab us, and we left.

Finishing this adventure was by far one of the most satisfying feelings in my life.

This route and course is by no exaggeration epic and absolutely one of the best ways to experience the raw beauty of Muskoka.

Huge thanks to The Paddle Shack in Gravenhurst for the use of one of their fine watercraft – a 17ft Evergreen Maple. Also, BIG thanks & congratulations to the organizers, sponsors, volunteers & ski patrol on an amazing event. And check out the video below (I make an appearance) produced by Pure Muskoka

It’s been a long summer…

November in Vancouver is commonly…