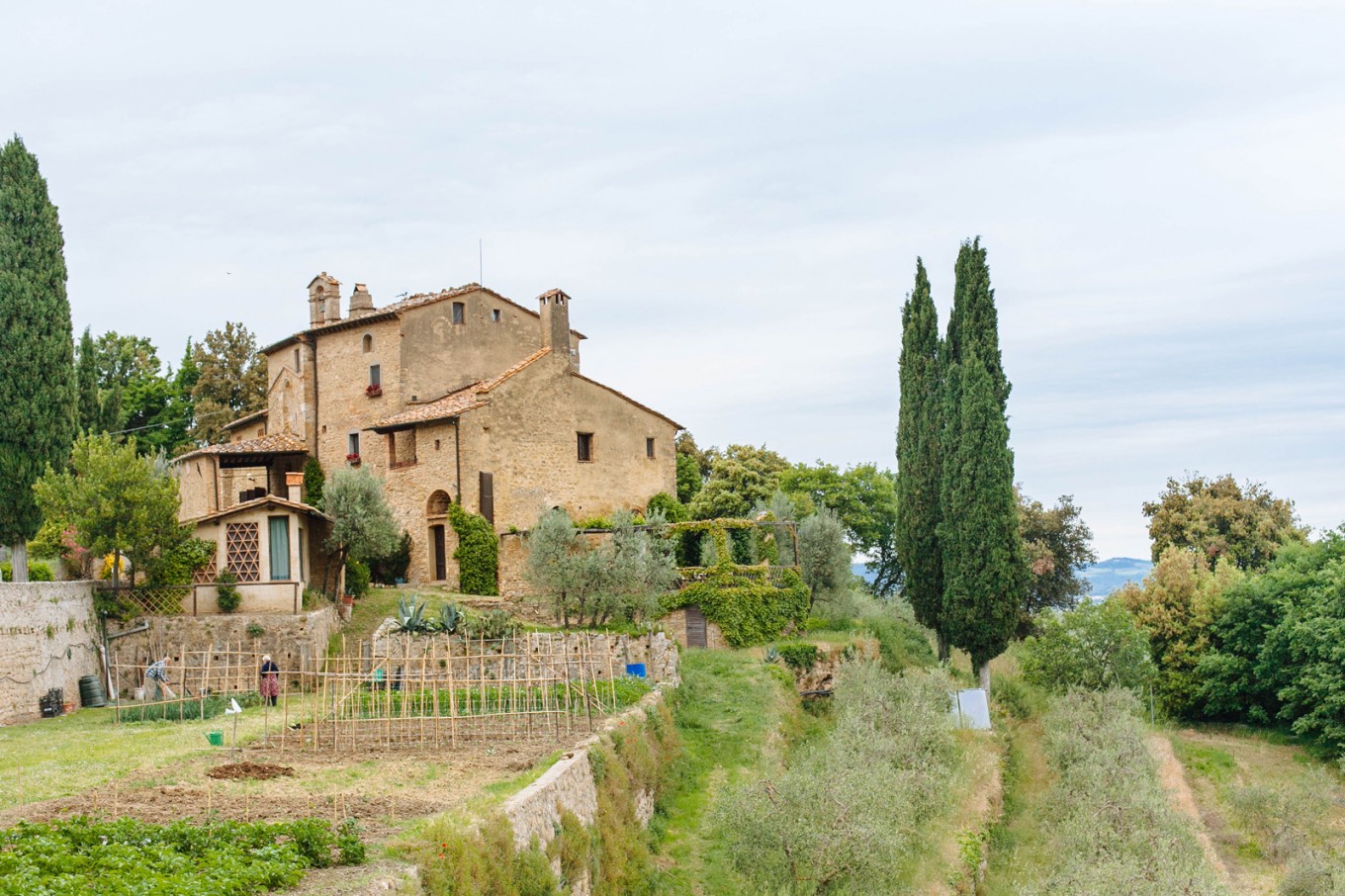 The second half of our trip consisted of a road trip out to a farmhouse in the rolling Tuscan hills. This is where the trip gets interesting.

When in Italy you: drive on the right-hand side, drive a manual-transmission car and rent the smallest car possible. I saw a Mazda Miata in Florence and it honestly looked humongous and the roads are at times quite narrow with no shoulder. I will confess that before this trip I had no manual driving skills/experience. There was always the option to rent an automatic but when in Rome…

My thought was that Dave could do most of the driving and for fun he could teach me. What actually happened was that I found out Dave couldn’t actually legally drive in Italy; he only had a paper license. Awesome, I would be the one driving the car. To cut the story short when the lady inside the rental agency looked away, the one who asked me multiple times if I was the only driver, Dave jumped in the driver’s seat and we drove off. Wait, did I tell you he’s Australian, where they drive on the left-hand side? Here we are driving through the narrow streets of Florence, insert a million round a bouts and chaos ensues. Oh yeah, we also didn’t bother getting a GPS. Here’s to winging it! Dave’s plan was to get us out of the city and hand over the driving duties to me. My plan was to avoid driving at any cost. Fast-forward to 3 hours later, 1 failed attempt at me taking over the driving, 15 minutes of silence and tears, a few wrong turns, David yelling and grabbing the ‘oh shit’ bar (I still don’t know what I was about to hit), David accidentally driving on the left-hand side and 1 newly minted stick driver (that’s me!) we arrive at our destination. Thank you driving instructor Dave!

The San Lorenzo Farmhouse is located just outside of Volterra, in the heart of Tuscany. The farmhouse was originally a Franciscan chapel dating back to the 12th century and has been beautifully restored with several guest rooms and a chemical-free pool that is fed by mountain springs. The grounds also serve as a working olive farm with more than 1000 olive trees that are used to create their own organic extra virgin olive oil. Many of the meals are created with seasonal products found in the garden, with fruit trees and herb gardens surrounding the farmhouse.

The chapel now serves as the dining room and is also where I took my very first cooking class. I love Italian food, I mean I really love it. Some girls cry into their ice cream but I prefer a pesto or maybe a good bolognese to wallow over. So when I found out that cooking classes were offered at San Lorenzo, I was over the moon. Giulietta was an amazing teacher; her laid back style made me feel at ease when cooking some of Tuscany’s most iconic dishes. Her motto is “good plus good equals good”. We made several dishes including apple cake, bolognese sauce, pesto sauce, hand made pasta and a pork loin cooked in milk (by far the most amazing thing I have ever tasted!). The fruits of my labor were served for that evening’s dinner and I couldn’t have been more proud. The food is so simple. The dishes required minimal ingredients – a tradition that stems from what Giulietta calls ‘peasant cooking’, and calls back to a time where you made do with what you had available to you. I have since recreated many of the dishes at home thanks to the cookbook written by Giulietta. Never again will I cry into No Name spaghetti sauce.

The farmhouse is located 40kms east of the Mediterranean and is worth a day trip to the beach, if only to experience the hairpin turns and holding up traffic while you figure out how to downshift and narrowly miss a tour bus coming at you. We decided to head to Cecina, a place I randomly chose on Google maps. Unfortunately most of the beach was closed due to construction. We did still enjoy an espresso by the sea and marveled at the brilliant shades of blue. There is something magical about being near water.

A trip to Volterra is also highly recommended and only 5kms from the farmhouse. Volterra is believed to have been continuously inhabited since at least the end of the 8th century BCE. We walked the cobble-stoned streets and surrounded ourselves with history…and pigeons; there were a lot of pigeons. They live in the openings of the crumbling stone walls and give life to them with all their coo-ing and wing flapping. It’s creepy. Volterra has the advantage of being located on top of a hill and offers sweeping views of the rolling Tuscan hills. I suggest going in the early morning so as to avoid the buses (that you narrowly missed the previous day) full of tourists. Take the time to walk the side streets as well, a lot can be seen when you drift away from the crowds. Many small markets sell beautiful fresh fish something I found astonishing at first. It was explained to me that fresh fish is readily available due to the fact that Italy is so narrow and the sea is never far away.

I have heard from many people that they have been dissuaded from renting a car when travelling in Italy; it’s too busy, they drive like maniacs, ect… I would have to say that there is no merit in those comments. Driving through Italy gave us the opportunity to get away from the crowds and really see what we wanted to see and some places are only accessible by car. Our best memories were those when we were driving, getting lost, going somewhere new or dropping off the car without a scratch on it.

Time To Go: The spring or fall, Olives are picked in October

Local Tip: Buy olive oil fresh, olive oil unlike wine does not get better with age

Don’t Leave Without: Fresh olive oil, as much as you can fit in your luggage

Setting off on a seven…