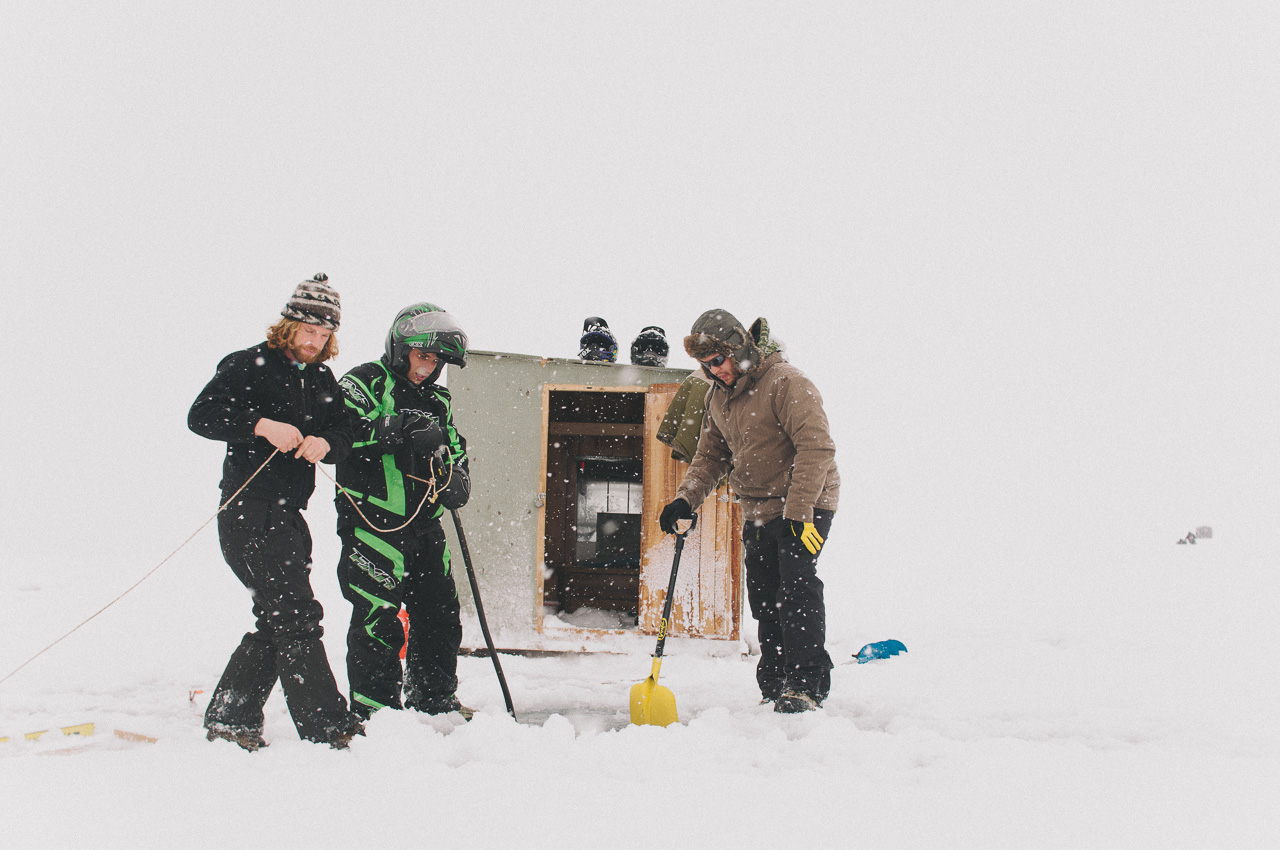 We set out to find a few men who enjoy the traditional art of ice-fishing. Being alone, standing on 100 feet of water on an 8-inch piece of ice is something worth experiencing and the closed-off and snowglobe atmosphere makes you feel as if you were on another planet.

We loaded up the car and set out from Toronto, Canada about 120km North to Lake Simcoe which is a traditional and very popular lake that supports the sport of ice-fishing and many make the trek out and line the concession roads of Simcoe County to get a piece of the action. Ice Fishing season typically lasts a short-window from late December to March and the oftentimes unpredictable weather can make for good or bad ice years. This year however, saw about 8-10 inches of ice in places and cold temps and flurries meant we would be chasing the fish all over the lake.

First things first, we loaded up the snowmobiles and headed out to collect the fishing hut in order to move it into a spot better suited to actually catching fish – The spot it was sitting was getting blown up by local and traveling fisherman and bets were made on the rich fishing in the new spot.

The sleds; reliable beasts that have seen their fare share of work were ready to transport us across the ice, over pressure cracks and the ruts and humps of other ice travelers before us. A warm-up with a sudden bout of flurries and then cold-snap made a sandwich of snow, a thin layer of ice and three inches of slush which made travel difficult – the snowmobile would buck and sway while the track spun for traction. We pulled up to the hut, sitting there under the morning flurries waiting to be taken to the new spot.

Our destination was about 10 miles away and the Hut was hooked up to a snowmobile and dragged for the length of the journey behind us. With one driving and the other with an eye on the cargo (the hut was outfitted with alpine ski runner to help it move across the snow) and off we went – bumping and jostling on a cold soup of ice and snow.

With little drama the convoy kept on forging ahead, navigating pressure cracks and small villages of ice-huts and lone fisherman sitting on little stools, dropping their lines on miniature rods to the depths of the lake.

Once we arrived at the prime fishing location (which was calculated by past experience, word of mouth and some general fishing knowledge) the hut was unhooked (after inspecting some damage caused by jumping a pressure crack and having a ski and runner tear off the bottom, I was assured it was “no big deal”) and the new holes were bored out.

The thickness of the ice was determined as safe (that big chuck is the thickness in that particular spot) the rest of the holes were augured out so the hut could be slid over top and fishing finally be able to commence.

Once the hole is prepared by auguring 3 holes and chipping out the space between them to make something large enough to pull fish out of, the hut is slid over and put up on blocks (so it is level) and snow is piled around the bottom to create a wind barrier and secure the hut on the ice as a cohesive unit. The ice chunks and slop from the work done to open the hole is fished out to make a nice clean working space.

From the move, the inside of the hut was left overturned and required to be set up again. Found inside are sleeping bags (the owner does spend nights out here in order to catch the early morning fish), a propane stove/heater and fishing supplies go under the benches.

The centerpiece to this Adventure is the hole. The hole provides a source of light (the light reflects through the ice then back up through the hole, allowing you to see while the door is closed) and also provides the fish or the reason why anyone does this – It’s the portal to a story, to food, to practicing a skill and ultimately this is the goal. The hole represents crossing over, bringing the fish through the light into another world. Into our world.

The hole acts as a conversation piece, you speak over it to your comrade on the other side of the bench  and you pass things to them, carefully, for forever losing the item is a reality (ask anyone who has gone ice fishing if they have dropped something down there) and if you are very lucky and the timing is just right you can see schools of fish pass through – the colliding of worlds where we can sit atop an expansive aquarium, dropping our line in their world and we sit, and we hope, that they’re hungry.

Adventure Seekers would like to thank: Mike, Ken and Tyler for being such gracious hosts and for letting us document what is seemingly a normality for them, but a new experience for many.