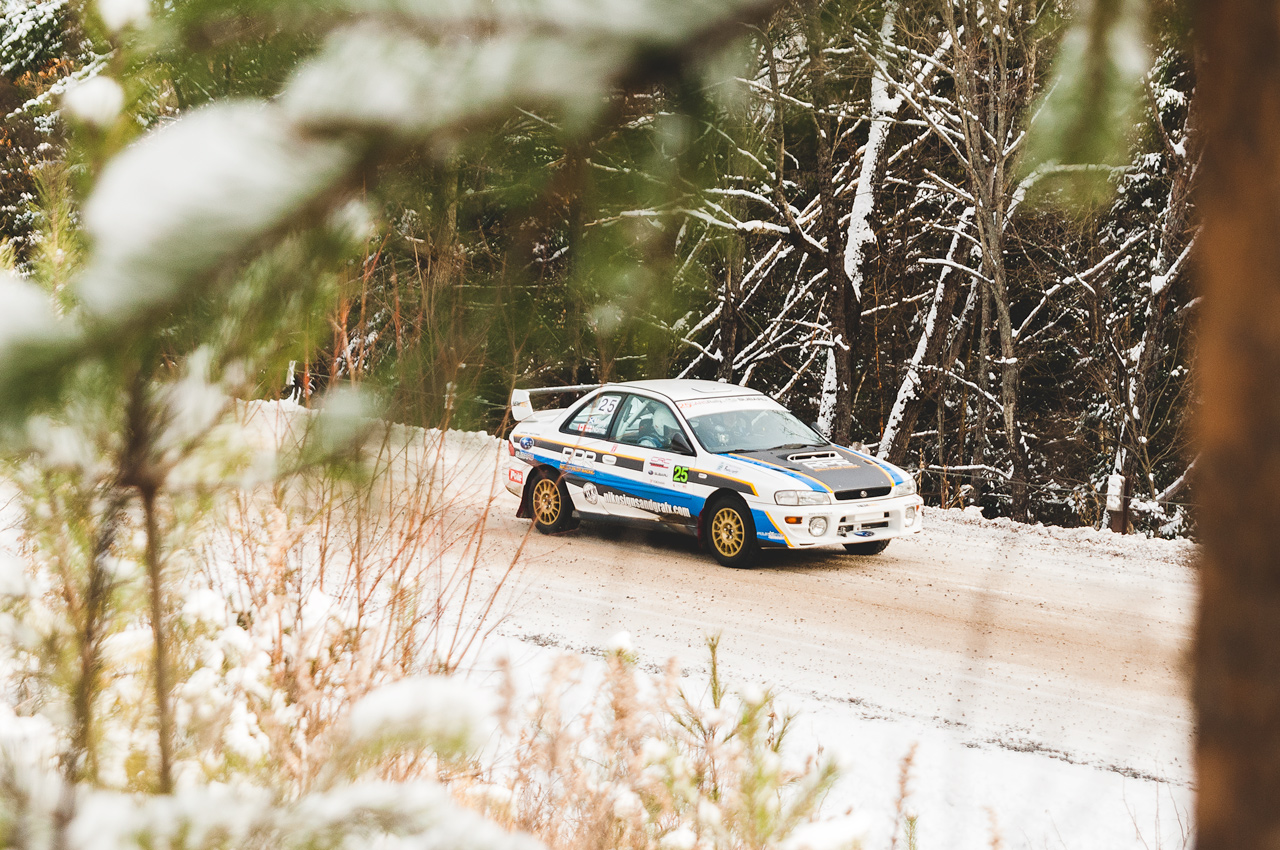 The Rally of the Tall Pines is the final stop in the 2013 Canadian Rally Championship that sees 30 drivers compete against the clock and each-other in what can easily be considered the most challenging and exciting form of motorsports only reserved for those with the uncanny ability to tiptoe on the edge of physics.

Being a short 300km drive from Toronto, Bancroft is nestled NE of the town of Peterborough and is home to about 4000, each enjoying the rocky outcrops of the Canadian Shield and being close to the York river and Algonquin Park and Ottawa to the east. It has been home to the Tall Pines (appropriately named as there are plenty of big pine trees that line the race course) for decades and continues a rich tradition of showcasing Canadian rally talent and the difficult terrain of being a November race (unpredictable weather keeps competitors on their toes for tire choice).

If you are new to the sport of rallying; you must know how difficult it truly is. Unlike traditional motorsports where drivers navigate a set course on asphalt and continually complete practice and race laps, Rally racing is basically driving as fast as possible down twisty gravel roads with a passenger yelling directions at you a couple of seconds before you approach turns and changes in the road – All while trying to win the stage.

The drivers dance the car between corners, often taking them sideways in a flurry of a mechanical aural assault, spewing gravel and snow in clouds behind them; nothing is sacred on the timed stage. Drivers are aggressive and take chances whenever they can, oftentimes crashing or suffering mechanical failures from trying to gain the competitive edge.

The drivers progress through set stages that are timed on either end – Fastest through wins, it’s that simple. The drivers mission is to cut through the windy stage as straight as possible. The driver forces the car through the corners using power, an all-wheel drive system (so the rear wheels push and the front ones pull) and some specialized driving techniques to lasso the car into following the will of the driver, and the mercy of the co-pilot. Scandinavian Flick, Heel-Toe, Handbrake Turn are just a few of the skills the drivers have in their quivers.

The cars are loud, pure-bred racing machines. You can hear the cars roaring towards you with the throaty sound of the intake sucking in air and the whine of their gearboxes; as they get closer the bouncing gravel in the wheel-wells and rush of air overcome you. The squealing of their high-performance brakes slowing the car down, bumping over a snow/gravel mix as the rumble, angry bees-in-a-blender exhausts boom off the rocky outcrops and up out into the cold November air. Bring it on.

The Rally isn’t a continuous race in the traditional sense; teams are allowed breaks in the action to perform work on the cars if they need mechanical or cosmetic repair and all must still follow a set of rules to allow them to remain competitive. Sometimes after a crash and all the mechanical bits are good, you just tear off what’s broken and get back out there.

The cars are all very similar and are modified production cars typically by Subaru or Mitsubishi because they both have factory installed all-wheel drive systems. They are turbo-charged four cylinder motors that make around 300hp which is enough to scare just about anyone strapped in a stripped down shell of gravel spitting fury. Teams are either backed by sponsors or private entries are able to compete as well. There is an emerging 2 wheel drive class as well that is a less expensive way to get involved in the sport and sees a variety of modified production vehicles.

The Rally of the Tall Pines is an exhilarating experience for passive car fans or for the hardcore rally lovers. You simply don’t find this type of racing in Ontario, let alone in Canada. The results are never unexpected and the driving is always entertaining for gear-heads and Adventure Seekers alike. Loud, fast cars with crazy talented drivers is just an awesome thing to watch.

The Canadian Rally Championship visits Quebec, British Columbia and Ontario every year from February to November and it is on our list of must-see events in the Country.

November in Vancouver is commonly…