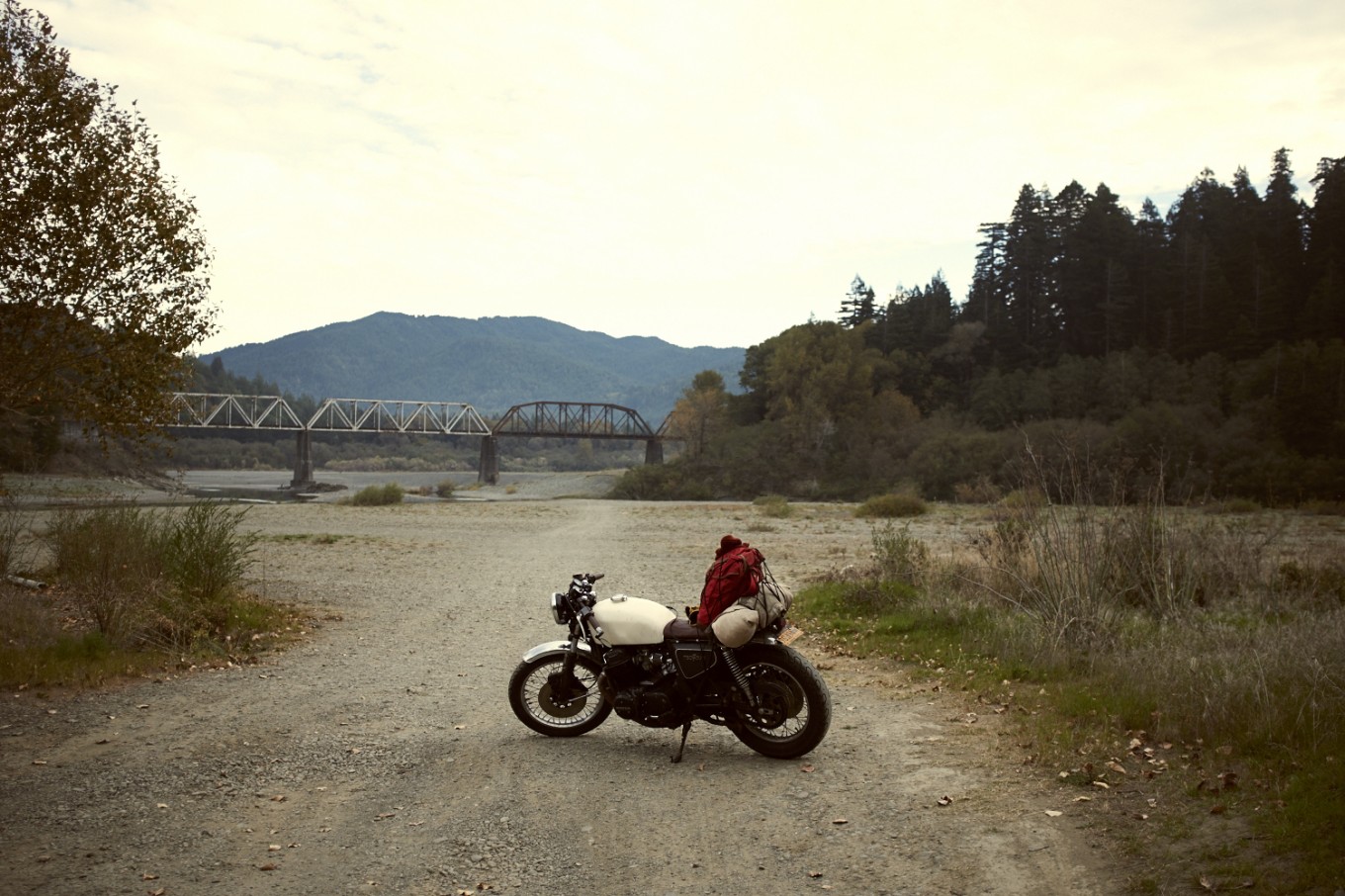 Sometimes, you just gotta go. For Vancouver Island native and fashion photographer Mackenzie Duncan the call of the sandy beaches and endless sun of California were too loud to ignore. So he did what any Adventure Seeker would do, hopped on his 1976 Honda CB 750 motorcycle named Marla, pointed it south and with open arms, embraced the journey ahead of him.

Adventure Seekers is proud to share excerpts from Mackenzies personal journal of his trip along with his images documenting the experience.

The mountains were layers of blue as the sun snuck down below the horizon, misty clouds and west coast ocean blew spray onto the ferry as I sat on the outer deck taking it all in. After a perfect brunch with my family my visit home came to a close, as quick as it started it was time to step into a new moment and head off down the coast on Marla, my newly redone 1976 Honda CB 750. There had been bumps during the rebuild, but it was mostly aesthetic and if she had already done the 4500 km trip from NYC to Toronto and then across to Vancouver Island she’d be fine for this jaunt down the coast to California.

It had been a cold ride down Vancouver Island with a few showers but the ferry ride over to Port Angeles has made it all worth while as the sun blasted orange into the sky and then slowly faded into darkness as the lights of Port Angeles came into view and I jump back on Marla and drove into town to find a place to lay my head for the night.

I woke from a heavy slumber and peaked out the window to see the sun breaking through heavy clouds. I hoped the sun would win this battle as I layered up and prepared for the day. I was feeling great drifting through town but as soon as I hit the open highway it got cold. Fast. The wind became piercing and my nose started to drip as my eeys watered. Not as warm as I had hoped, but I really wasn’t surprised.

I made my way along the coast, spying the ocean through the heavy North West woods. Marla was running smoothly and the sky had began to clear. The mist was heavy as it rose off of the water and the sleepy little towns I passed began to show signs of life. The terrain started to rise and the temperature took another dip, it couldn’t have been much above freezing at this point and I was very thankful for the heated vest I decided to splurge on for this trip, but had an inkling of regret for not getting the matching gloves.

As I neared the coast the clouds that had been slowly thickening began to pour rain. I had made it around most of the Olympic Peninsula but it was looking like I was in for some real West Coast weather. My visor started to fog up and the road became dotted with puddles. I made my way across the bridge to Astoria and then continued on down the coast, shivering away. Cliffs and waves greeted my ever glance. The road rose and fell with the revs of my engine which was up for the task.

I stopped here and there to snap some frames and take in the view, eventually pulling into a sleepy beach town to dry off for the night in a small motel. I passed the evening stealing views out of my window at the long sandy beach as my socks and gloves dried out on baseboard heater.

I woke to a glassy overcast day somewhere along the coast of Oregon. I’ll have to look it up as I’d like to visit again. The hills peaked out from beneath the drifting fog, the whole scene reflected in the wet sand of the seemingly endless beach. My coffee in one hand and my camera in the other I wandered the beach, much like I’ve been wandering this highway heading South. I packed my things and drove off into the misty morning singing, ‘In California, always summer and hot, out on the highway, we ride tonight.’ Lyrics from one of my favourite Ryan Adams songs.

An hour or so in the rain came once again and blanketed me and the rocky beautiful coastline in sheets of wetness. By 11am I was in a laundry mat half naked, shivering and frozen to the bone while I dried my things. The rain had slowed but by the time I was back on the road it came again and the next few hours I puttered along, stopping often to snap photos off of lookout points of jagged rock cliffs and never ending sets of empty waves.

I had been riding without rain for an hour or so when I pulled into Port Oxford. A tiny coastal town with an equally beautiful coastline. A long, arching sand beach with massive rock forms sticking up out of the beach and the water, scattered like marbles all down the coast.

I spent the night in a cheap motel to warm up and dry my things out again, and I woke to see patchy clouds scattered over banks of fog with the sun working it’s way through. I went for a walk on the beach and watched the sun rise after a short morning yoga session I hit the road.I knew it was forecast for rain as far south as Eureka the next day and I wanted to make as much headway South as possible so as to avoid more wet riding.

As beautiful as the morning looked the thick fog made driving slow and tedious but after a few hours of that the fog burnt off and the highway moved inland a touch. I met two different couples at different view points both from Alaska, both retired and road tripping. The one gentleman said I needed to come visit, a chunk south of Anchorage the highway headed inland and if you kept heading south towards the dead end you would find him and his wife in a small town with a Russian Orthodox Church on the hill. I was told to ask for the retired wrestling coach. I’ll definitely try to make it up there for a visit.

I took Marla to the car wash and then ate a giant greasy spoon breakfast in a small town that may have been Eureka, either way I had made it into California and hopefully past the worst of the weather. Soon after I found the Avenue of the Giants, a wonderful highway that twists through magical redwoods. As I drove the occasional maple leaf, busting yellow, drifted down in front of me. The sun shot beams through the trees onto the road. This went on for mile sand miles, absolutely beautiful.

Just when I thought the day couldn’t get more beautiful I pulled onto the top of highway 1 and made a twisty, turning shot for the coast. Knowing the day light was fading fast I pushed it as fast as I could while still driving safely. I caught the occasional glance at the burning orange sky through the trees as my engine howled and screamed, powering me to the ocean.

As I pulled out of the trees the whole expanse of the Pacific spread before me, shedding it’s last rays of light onto the scattered rocks, sheer cliffs and drifting highway that laid before me. I let out a scream of joy and had a hard time accepting just how lucky I am. That night I setup camp at the top of a cliff, setting up in the dark and not really knowing the terrain. I could see the moon rising over the pacific and the stars coming out but I just couldn’t keep my eyes open. I drifted into a heavy sleep as the ocean hair nipped at my nose and the coastal grasses sang me to sleep.

I woke to a crisp morning, i had set my tent about 6 inches away from a 30 foot cliff to the beach and was happy I didn’t roll much in my sleep or it may have been a painful morning. The moon was gone but the deep blues of the early morning light drew me out of my warm bag and down to the beach for a solo walk, not a soul in sight as the waves crashes and curled all along the coast.

I spent a long day on the road that day, passing through small beach towns, stopping now and then to snap a photo or two. The scenery slowly started to shift as the hills became a bit more arid, reminding me of my ride through Southern BC this past summer. There has still been banks of fog and cool breezes but over all the weather is beautiful, the highway came in land for a while, rising and falling, twisting and turning before heading to the coast again, hugging the steep hills with massive views of the Pacific.

As I neared San Fran I began to miss the small coastal towns and open space of the last few hundred miles and as the sun set in the west, Marla and I drove over the Golden Gate Bridge with thousands of commuters and into San Fransisco.

Mackenzie was born and raised on Vancouver Island in British Columbia, Canada. He has spent the last 7 years of his life pursuing his passion for photography and directing. Although he is based in LA, his career has taken from New Zealand to Nicaragua, Sweden to Switzerland and many places in between. In his spare time he can be found riding his vintage motorcycle around the country or traveling the world in search of waves

The Rally of the Tall…

You know that feeling you…