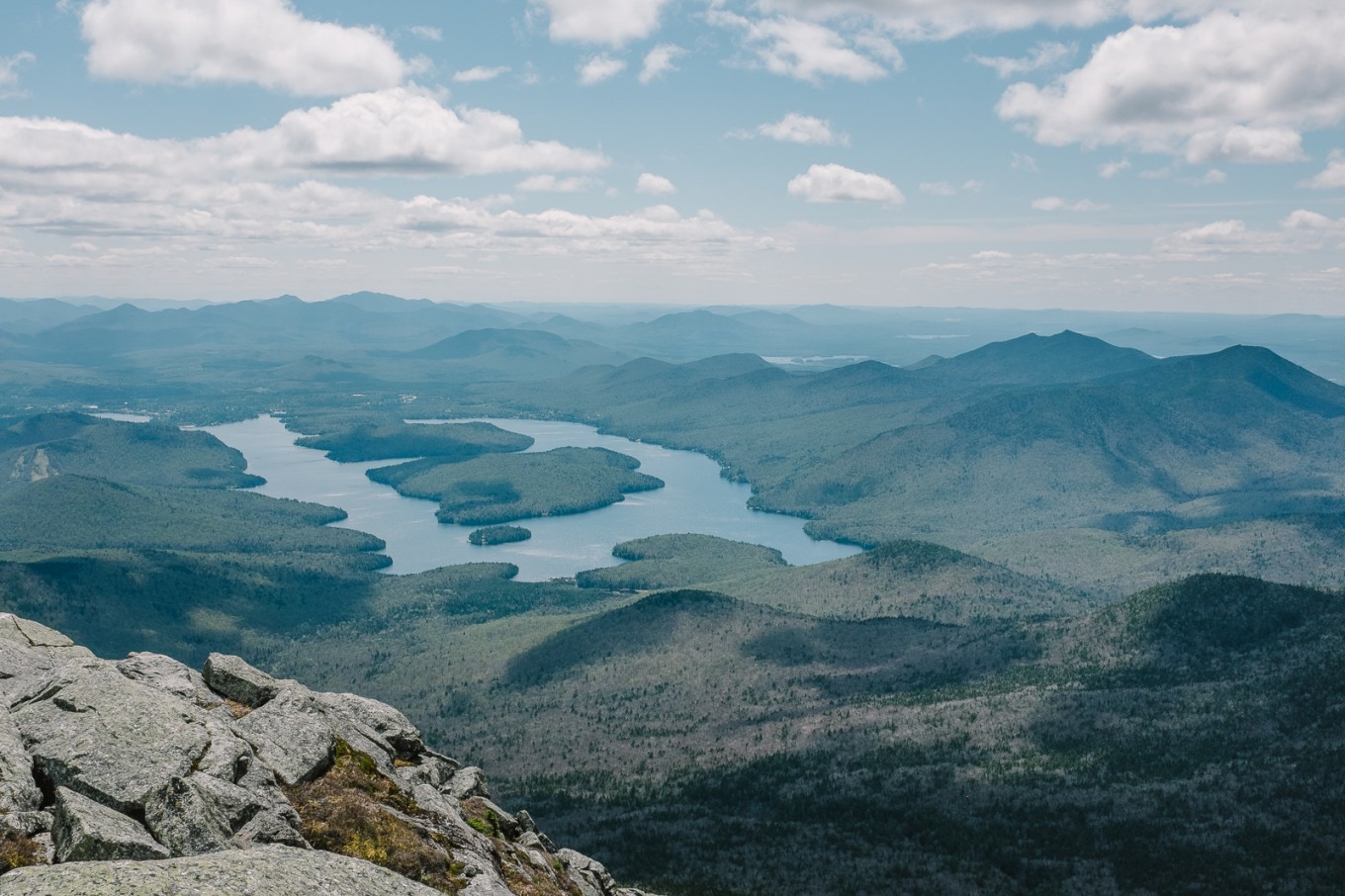 If you could wake up in Toronto and then eat your lunch on top of a mountain, would you believe me? There are certain things in life that need to be experienced and this is one of them. There is a place tucked away amongst the Adirondack mountains that if luck is on your side, will let you do just that. Wake up in Toronto and by early afternoon you’ll be experiencing a 360 degree panoramic view from 5000ft above sea level. Not only that, a host to two Olympics, the Ironman Triathlon and some of the best outdoor activities on the east coast are all found in one place…

Lake Placid is about a 6hr drive from Toronto. Hop on the 401 Eastbound until you hit Cornwall, hang a right and cross the bridge into the United States. From there, hang a left and a right and find yourself traveling back in time, as the two lane blacktop weaves its way through the Adirondack rolling hills showing discarded hunting camps, tall pine trees and the sleepy hamlets of New York State.

The landscape quickly changes as you make your way south-east of the border crossing and if you are big into urban exploration or just stopping to smell the roses of better days past. The drive peels back the shine of modern America giving way to dilapidated cabins, ramshackle homes in various states of disrepair and running thoughts of ‘what happened here?’ The scenic byway teases with gaps in the treeline exposing the Adirondack mountains in the distance, a preview of what’s to come .

Home to the 1932 and 1980 Winter Olympics, Lake Placid is a sleepy town of about 3000 people in the heart of the Adirondack Mountains. It’s dedication to sport helped secure both games with passionate and dedicated residents pushing to bring the games to their village. With the development of Whiteface mountain as a ski resort after World War II and the already existing ski jump and Bobsled venues from the ’32 games, Lake Placid was a prime candidate to be awarded the games for 1980 in 1975. And they were, hosting one of the last Olympic events that catered to the athletes and not corporations the Lake Placid games and village itself has been shielded by the corporate consumerism so prevalent in our times, and it shows.

The jewel in the eye of Lake Placid is Whiteface Mountain. Topping 4,865 feet above sea level, the mountain stands amongst its 40+ brethren peaks, each at least 4000ft tall and mostly accessible. Originally developed in the 1930s, Whiteface is THE reason to visit, if nothing else. It would be worth the trip to drive down, hit the summit (accessible by vehicle) and eat your lunch in the sky. It truly is breathtaking. On a clear day you can see as far north as Montreal, bring a pair of binoculars and be amazed what’s out there or just soak it all in, bring a book with you and be at peace with nature.

You can’t escape everything however, and being that the summit is accessible by car so expect there to be a crowd. That said however, nature is to be appreciated by all and regardless of the times in which we live there are opportunities to grab yourself a truly epic selfie. There are views in all directions with little placards of information giving little tidbits of factoids and helping enrich the experience with a bit of education. Sit back, relax and take it all in.

The story to us is simple; How does a tiny village of 3000 people host not only one Olympics, but two? That’s a history lesson in and of itself but also hints back to a time before the costs of the games reach upwards of $50 Billion. In speaking with people who have lived in Lake Placid their entire lives and even worked for the 1980 games, this was a time to celebrate sport and the glory of representing your country by tying bonds that are formed through friendly competition. This wasn’t a contest of who’s is biggest and who has the deepest pockets; this was a pivotal turning point in the spirit of the Olympics; it wasn’t political, it wasn’t geographical, it was sport.

There are many, if not all Olympic venues still intact and being used. Lake Placid is home to official Olympic training facilities, camps and tryouts. The bobsled course is all-new, the ski jump facilities are still used as are the skating rinks, including the famous ice rink that held the “Miracle On Ice” that saw a rag-tag group of amateur hockey players beat the USSR in a very real Cold War on home ice. There are hidden gems too, and if one knows where to look the everyday life of Lake Placid is steeped in the rich history of the Olympic Games.

A great place to start is the ORDA (Olympic Regional Development Authority) that oversees the former Olympic venues, current sporting facilities and maintains the Olympic Museum which holds a great number of artifacts from both the ’32 and ’80 winter games. The venues are open to the public to experience and walk about and explore, which we
absolutely did. The museum sell prints, stickers and tickets from the 1980 games, all original no re-prints which is very, very cool.

If you know where to look, or just get really lucky you can peel back the cover of time and step back into what life would have been like for the Athletes and for the residents of Lake Placid in 1980. Fueled by pure excitement and of host to the most prestigious sporting event in modern human history must surely be a great feeling. We didn’t get the vibe that the games were a hindrance, all venues re-purposed or borrowed from their original intent to host and then returned back to normal after the games left. There are however, examples of the games tied into every day life. The Ski jump towers stand tall above the trees, visible from around town just by looking up, standing tall.

Below, we see what’s hidden. The 1980 Bobsled track (you can see the new track in the distance), portions are re-purposed but mostly hidden by an all-new track that holds events and athlete training is crumbling, mossy and in disrepair, a shadow of it’s former glory. From the ice rink that held the hockey games and figure skating, we see some official venue chairs tucked into a corner – once used to seat the excitement of seeing the USA take a gold medal in mens hockey now sit idle, waiting for their next mission.

Sitting in the middle of a soccer / baseball / equestrian complex is the site of the opening ceremonies. An open-air event (Lake Placid did not really build any major infrastructure for the games) is the Olympic torch, standing upright a beacon of the spirit of the games watching over the young athletes as they compete, aluminum cladding creaking in the wind. You can see original information boards, signage and flags all throughout the town.

Lake Placid is a gem, no doubt about it. The prestige of being host to the Olympics put it in a class of its own but having all the right ingredients to an active persons paradise doesn’t help either. In the green season you can golf, road bike, mountain bike, hike, run on the winding roads. You can fish, canoe, kayak, raft and swim in the lakes and rivers. There are a ton of hotels (we stayed here), car camping sites and great places to eat (we had luck at the Lake Placid Pub & Brewery for dinner and The Breakfast Club for…breakfast).

The possibilities are endless in winter and summer, for a day, weekend or week there’s enough to do to fill your time. The roads have wide shoulders and special signage because they are used so much for athlete training, have pull-over spots for great views or hiking trail-heads (a great first hike is Cascade Mountain) and enough friendly locals to tie in the whole experience.

Special Thanks: This article was shot exclusively on the Fuji X100s, provided by Fuji Canada. Check out our review coming soon! Adventure Seekers would like to thank the hospitality of the Olympic Regional Development Authority for allowing access to the site venues and the tourism board of New York State.

33 Acres of Ocean and Life

It’s no surprise that one…

Iphone in Muskoka: Deep in Dominica

The roads of Dominica are…