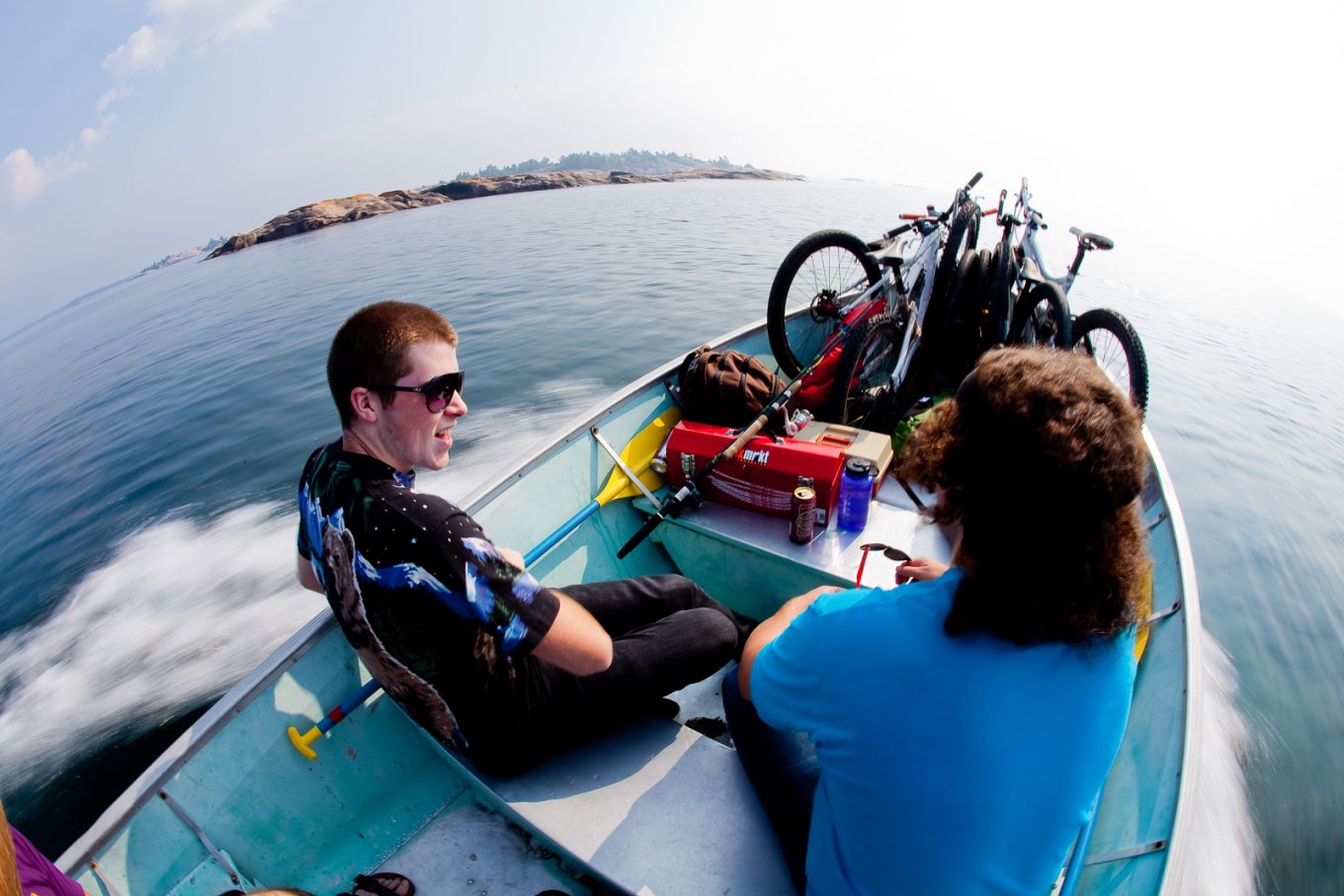 The Search for Skatepark Island

The generation gap was immediately clear. Having just loaded our bikes into a floatplane, we were high over the 30,000 Islands region of Georgian Bay – which makes for incredible scenery. And these two kids were staring at their cell phones, texting people. Thankfully, with no electricity where we were heading, their ability to remain oblivious to their surroundings was coming to a close quickly.

The first I’d heard of Skatepark Island came from kayak guides in Killbear. Then the kayak guides in Killarney were talking about it. They spoke of this semi-mythical island where the rock had been shaped just so, with transitions smoother than a skillfully crafted skatepark bowl. My interest was piqued and I made sure to get the coordinates of the island. This rumour had to be investigated.

Thankfully, the guys at Georgian Bay Airways thought it was a good idea, too. And so did the guy at Killarney Mountain Lodge. The plan was to fly from Parry Sound to Killarney, hop in a 17-foot fishing boat with our bikes and rip out to the island in question. We’d spend a few days shooting and camping in the bush before heading back. It was a lot of planning based on some random kayaker’s interpretation of a skatepark, but a damn good excuse for an adventure.

The crew I’d rounded up contained some of the best skatepark mountain bikers in Ontario. Eighteen-year-old Andrew Bigelow is a self-admitted mama’s boy. And this trip would mark a number of firsts for him: first time he ate a pickle, first time he took a dump in the woods and the first time he pitched a tent.

Like many of the skatepark kids, he wears girls’ jeans, “because they fit tighter.” Which is officially the worst trend since Kris Kross wore their jeans backwards. It makes me feel like an old man complaining about how “the kids these days wear their pants,” but seriously – girls’ jeans?

Twenty-one-year-old Kent Woods is a bit of a one-trick pony. If you want him to bar-spin something, he’s all over it. Kent is a genuinely good kid. His skill with a Swiss Army can opener is appalling, though. He had to resort to vice grips whenever asked to open a can. He gets funnier and funnier (to himself of course) the more scotch he consumes and between him and Bigelow, we had some serious freestyle mountain bike talent with us.

To round out the crew, and the age gap, Owen Sound’s Mike Comello came along for support. He joined my sorry, over thirty-year-old ass and thank God he did. Mike and I had a brief glimpse into what it would be like to father a couple of teenagers; they were basically useless. They couldn’t feed themselves, water themselves or fend for themselves. Fortunately, they hadn’t quite developed a taste for quality beer yet, which, thanks to Neustadt Springs Brewery, we had a lot of.

On the map, Skatepark Island is nothing special – just a small blip in amongst a thousand other blips surrounding the incredible Phillip Edward Island. I’ll argue with anyone that this is Ontario’s most beautiful region. The key to Skatepark Island’s rumoured smooth transitions is its geological history. With a major fault running the length of the region, pressures between the two plates a billion years ago forced the La Cloche Mountains of Killarney skywards, reaching the vertical equivalent of today’s Rockies. Lava punched through the surface and settled beneath it, now exposed through erosion as the pink quartzite the region is known for. A further deposit of calcium carbonate about 350-500 million years ago, from a giant sea that stretched from Mexico to the Arctic, has since hardened into limestone. Throw a giant, kilometre-thick glacier on top of all that, drag it back and forth through countless millennia, and according to some kayak guides, you get the perfect venue for riding. Supposedly, the greatest example of this smoothly striated and eroded rock is found in the Fox Islands. Which is, more or less, exactly where we headed.

Once we touched down at Killarney Mountain Lodge, we loaded up a 17-foot fishing boat with bikes, four guys, 96 tallboy beers and enough supplies for a week in the bush. Surprisingly, during the rental procedures, no one asked if I knew how to pilot one of these things. Which I didn’t. And as the marina owner, the owner of Killarney Mountain Lodge and a couple of their fishing guides stood watching me back out of the complicated marina docks awkwardly, fully loaded, they realized I had no idea what I was doing. I could feel them laughing and cringing as I narrowly missed three boats, and the docks themselves. Everyone in town already thought we were idiots for going on a mountain bike trip to the unrideable Phillip Edward Island environs, but once they saw us drive the boat, it was confirmed: we were a bunch of yahoos.

Upon arrival at Skatepark Island the kids, as Comello and I referred to them, immediately found a small lip right in camp. They hucked and carved the tiny transition, yielding some of the best photos of the trip almost instantly. For Bigelow, setting up his tent did not go so flawlessly.

For the next three days, as we explored many of the islands in the Foxes, riding the transitions here and there, we discovered that a kayak guide’s idea of a skatepark is quite different from an actual skatepark. Skatepark Island’s transitions are far from perfect. What may look like a beautiful eight-foot quarterpipe from the water turns out to have impossible run ups or roll outs. Perfect banks to walls have immovable curb-sized rocks mid-tranny and massive cracks situated in exactly the wrong spot.

That’s not to say riding here isn’t an amazing experience. One can’t help but compare the Canadian Shield to the sandstone of Moab, Utah; it is grippy like a meandering sidewalk, providing traction in the most unlikely of angles. The rock feels exactly like Moab’s legendary and hugely influential Slickrock trail. Without a doubt, a few dedicated trail builders could turn this into a world-class mountain biking destination, its remoteness providing part of the allure. But it would take a lot of work.

On our last morning, as I lay in my hot tent trying to sleep off a final Neustadt binge, I cursed whoever it was as they rifled through our food box noisily. And then Comello spoke up.

And as I looked outside my tent I realized he wasn’t kidding. Six feet from Kent Woods’ tent, a black bear sat casually trying to find something to eat. Woods stood bone still in his tent, hunched over, terrified while Comello and I started yelling and throwing rocks at the bear. For the rest of the morning we repeatedly threw stuff at the bear to scare him out of our camp. In essence the bear represented what we all knew. It was time to get off Skatepark Island. And while I know I’ll be back, I’ll definitely do a few things differently; and I’ll probably arrive in a kayak. Without my bike.

The Phillip Edward Island and Area Sea Kayaking Guide by the people over at The Adventure Map, is the only map to label Skatepark Island by its actual name: Blockbuster Island.
Killarney.com / Georgianbayairways.com

Colin Field is a writer, photographer and editor that specializes in outdoor adventure. Formerly an editor at Mountain Life, SKIER and SBC Kiteboard he's now a full-time freelancer for various clients, both in a commercial and editorial capacity. To see more of his work, check out colinfield.com.