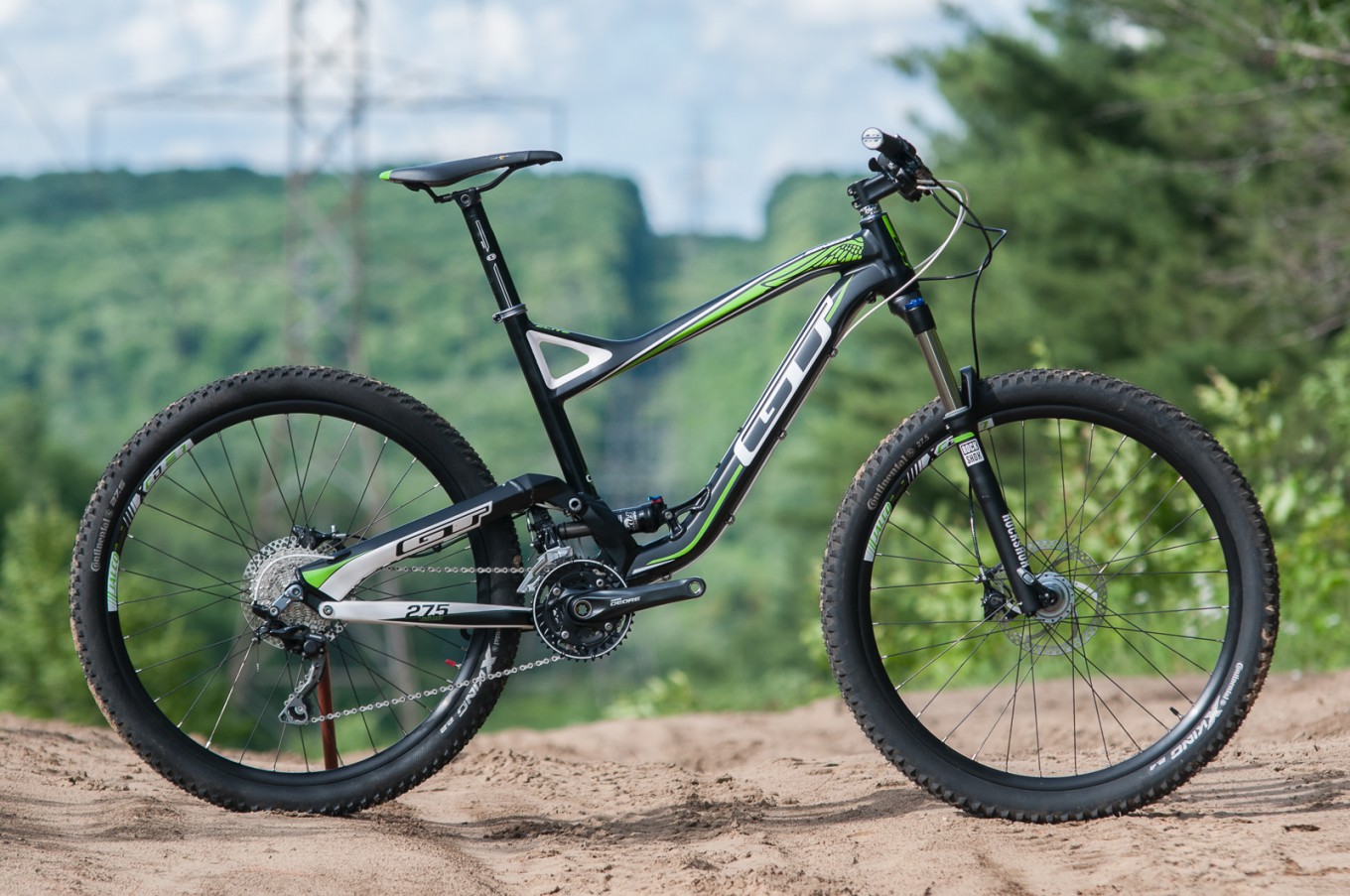 Bicycles provide so many different things for each rider; they’re a vehicle, a way to get to work, an escape from the world, a stress release an…Adventuremobile. Since it’s inception, the bicycle is one of the only inventions that were pretty much nailed on the first try. Circles turning circles that are just as happy cruising on the boardwalk or smashing through wooded trails. For every great effort in cycling, there’s always a great reward.

To accompany our urban Adventuremobile, we set out to find its off-road, burly counterpart. We were looking for something cost-effective, of high quality and able to tackle all kinds of terrain. After looking for a trail bike with 27.5″ wheels with a reasonable amount of travel, we discovered the 2014 GT Sensor Elite mountain bike.

GT bikes was born in 1974 have been making all types of bikes for all types of different riders throughout the years; we were looking for a brand on the upswing with an interesting product that not many people may be aware of and the Sensor line checks all of our boxes; looks good, rides well and priced right. Follow along with us our journey on riding the 2014 GT Sensor Elite.

If you’re into wrenching on bikes and you get the opportunity to build one yourself, we highly recommend it. There’s something very satisfying about cracking open a fresh box and unveiling what lies inside to the world. We took our 2014 Gt Sensor Elite across town to our old friend and Downhill racer and lover of all things bicycle Ken to help bring it to life, swap stories and of course use his sweet tools in his awesome home-based bike garage. We liked the overall build quality of the bike; the welds were nice and clean (some were smoothed out even) and it wasn’t obvious if there were any cost-cutting measures or anything that really stood out to be inferior or raise any red flags.

We put on some tunes, grabbed a couple of cold ones and waxed poetic about the years of riding under our belts and what the future may bring. We got the bike dialed and immediately headed out for it’s first shakedown.

The GT Sensor Elite is part of the 130mm full suspension, 650b wheel lineup offered by GT. Starting at $2899, the Sensor line climbs all the way up to a $9000+ Carbon Team edition that’s about as kitted up as you can get. The Elite is the first model, coming with an aluminum frame with a journeyman spec of tried-and-true, durable and reliable components and coming from an avid rider who has owned a variety of very expensive bikes, the $3k range is the sweet spot for performance / durability / reliability in the biking world. This bike is a front fork upgrade from being all you’d ever need (more on that later) out of a trail bike (possibly a dropper-post as well) and is quite a machine that is fully capable of smashing almost any trail in the entire province.

The build kit is fairly standard for the price. A nice addition is the Formula C1 brakes; you get the nice lever feel and stopping power that Formula is known for but without any bells and whistles. The drive-train is almost all Shimano Deore that’s been proven over and over again to be reliable and consistent; it does however come equipped with a 3×10 system that overloads the rider with choice and many gear choices remain unused through multiple rides. We’d prefer to see a 1×10 in this instance that is much easier to manage on trail and lose the unnecessary gearing (stay tuned for the 2015 lineup for that).

Our only gripes were with the choice in wheel-set (standard double wall rims with no-name hubs) nothing special there (but equipped with through axles on both ends) and the allen-key only seat-post clamp (this is probably because you’d be inclined to run a dropper-post there anyway) and a seat that we wouldn’t exactly describe as comfortable, but other than that, the GT impressed us through and through. The head-angle is 68.5 degrees, a little on the steep side – coming with a borderline enduro build, the Sensor straddles the line between trail bike and enduro rig but GT seems to leave the final choice up to the rider; swap some parts for enduro, leave some for a trail rig. Easy peasy.

We enlisted an old friend and test-rider (DH park builder, racer and lover of everything on two wheels) to help evaluate the Sensor and share notes of our impressions of how the bike rides and handles various terrain throughout our time with the bike. If you aren’t an avid cyclist and don’t know enough about all the nuances of how a bike rides but are interested in riding a GT you can stop here: It’s a great riding, handsome and fully capable trail bike that will meet all your needs and exceed expectations, full stop. Especially in this region of Canada, the 130mm trail bike is the jack-of-all-trades when it comes to tackling our varied terrain.

The bike rides as a cohesive unit; it’s stiff has heck and that giant swingarm really help tie the bike together and is very noticeable, especially in turns. Some bikes you can feel them flex out in corners but the Sensor stays stiff over rough terrain which adds confidence on the trails. The GT Angle Optimized Suspension (i-drive) has a noticeably different feel than say, a Maestro equipped bike and the bottom bracket is connected right to a lower pivot to allow the suspension to act independently of the drive-train keeping everything smooth and in check.

The frame, geometry and rear suspension design of the GT sensor is a home run, no question. The parts spec leaves a little to be desired but considering the price point we’re willing to let some things slide; however we weren’t big fans of the Rock Shox Sektor fork. Equipped with nothing but adjustable rebound, this air fork didn’t perform up to the rest of the bike and seemed to wallow on the rough stuff – coming from tuned Fox and X-Fusion forks, this was the biggest let down but we understand why and wouldn’t let the fork be the deal breaker here, it’s all about preference when it comes to suspension tuning.

The 650b wheelsize found on the Sensor line  is exactly what we’ve been wanting. After not enjoying the experiences on 29″ bikes but attracted to the idea of carrying speed and having an easier roll the 27.5″ size is the best of both worlds of traditional 26″ and the efficiency of 29″. The biggest takeaway here is that the 650b size fits in so well that while on the bike, the rider isn’t always aware of the rotational size of the wheels and it performs quite similar to a 26″ wheel on the trail with a bit of added speed and stability.

Overall, we felt the 2014 GT Sensor Elite to be a robust, economical, stable and reliable package. The design language, proven performance of the Angle Optimized Suspension and brand history that GT carries with it should propel it to the near top of anyone’s short list for a new bike. The bikes’ ability to handle varied terrain, especially downhill sections was refreshing – you just had to point it where to go and it would shoot through sections with ease. Climbs were equally as trouble-free – the rear wheel stayed planted to the ground even while mashing the throttle to break the crest of the hill. The only issues we found were not with the ride but with the specific build kit chosen, for the price it could have been executed a bit better (that is, if that kind of thing matters to you).

Even with the shortcomings of the specific build kit on the bike, the fundamentals are there for an incredibly rewarding platform on any trail, in any situation. Everyone we showed the bike to had positive reactions and took a great interest to see the accomplishments GT has made thus far. She will be a fine adventuremobile, poised to offer tons of experiences riding with groups, solo trips and anything in-between.

Just ride one, trust us.

Special Thanks to: Bell Helmets, GT Bicycles Canada, Ken for his hospitality and Mike for his riding skills.

To find a local dealer of GT Bikes, click here. GT Bikes can be found at your local Sportchek stores throughout Canada and at select bike shops.

The moment is still; my…

You’d have to be as…